Publisher: Waddington's (UK), 2014, 1000 pieces Title:  “Santa's Workshop”, Limited Edition Christmas puzzle 2014,  Artist: uncredited OUR RATING: 7/10 I love the annual limited edition Christmas puzzles, and Waddington's is the grandaddy of them all.  (See our list of all of these puzzles here.) The puzzles are now produced by Winning Moves (a game company) and are manufactured... 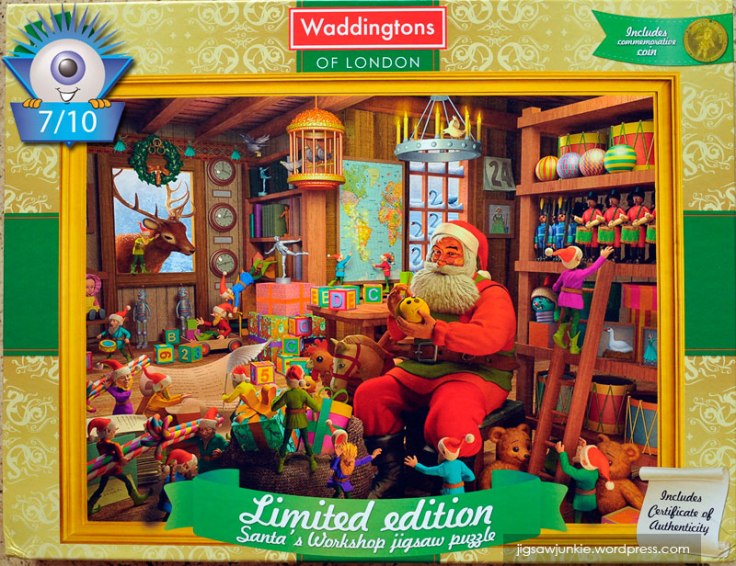 I love the annual limited edition Christmas puzzles, and Waddington’s is the grandaddy of them all.  (See our list of all of these puzzles here.) The puzzles are now produced by Winning Moves (a game company) and are manufactured in Ireland. Here’s a review of the 2014 offering — number 19 in the series!

The box, as always, is quite nice. It’s sturdy and has a lovely festive design on the front (see above), sides and back.  The back has information about the puzzle and the limited edition series. The artist is not mentioned anywhere, only that the image was commissioned specifically for this puzzle by Waddington’s. 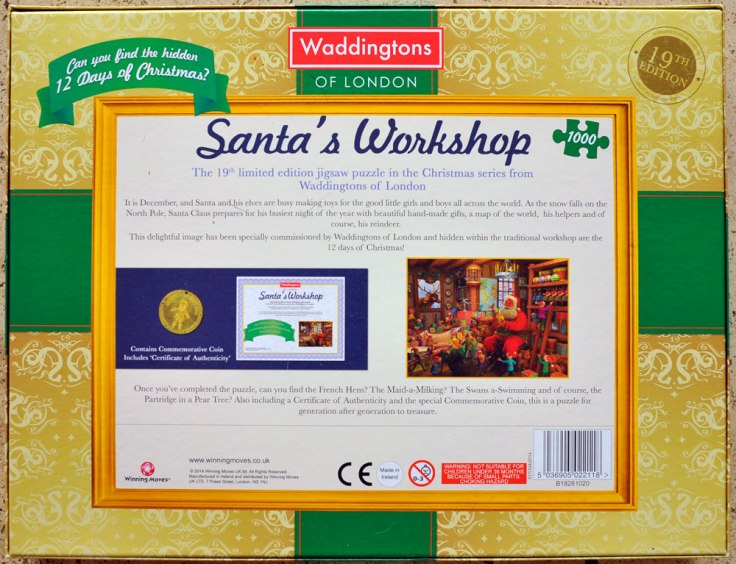 The sides are simple and just have a photo of the puzzle, the Waddington’s logo, a piece count, and the “Limited Edition” wording quite large. The name and/or number of the puzzle, or year, would have been nice to have on the side for arranging with the other puzzles in this series on the shelf. 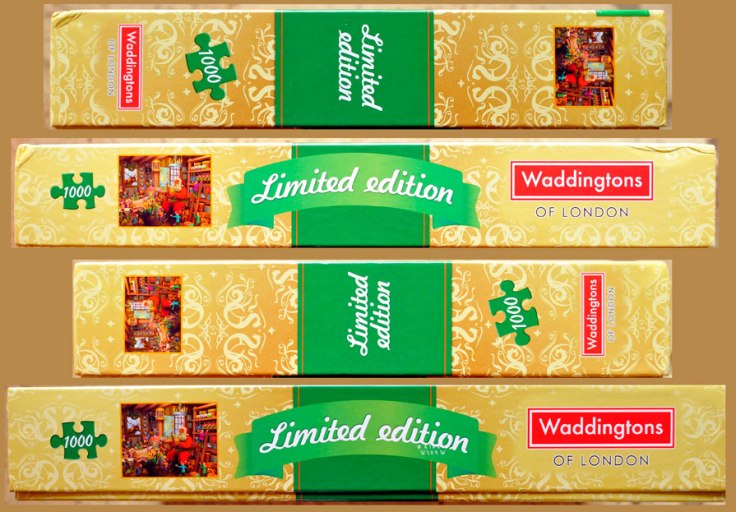 Inside the box there’s the bag of puzzle pieces, a limited edition certificate that also information on where to find the “Twelve Days of Christmas” images within the puzzle, and a coin.  All of the Waddington’s limited edition puzzles come with a certificate (and with a coin or ornament).

As usual, high marks for a collectible box! 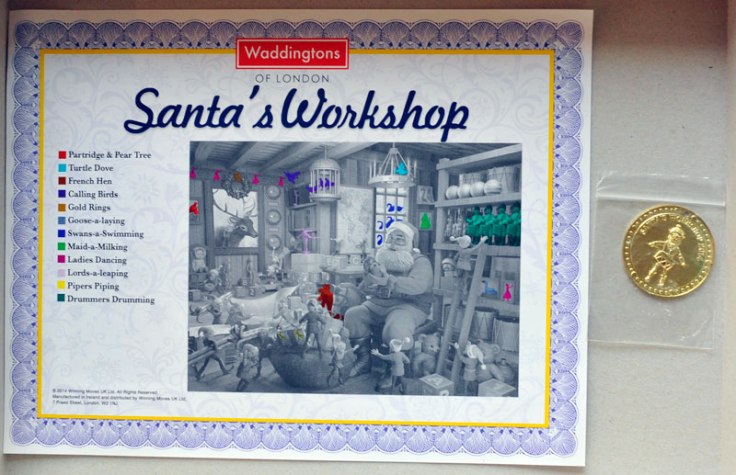 This image is not my favorite Waddington’s Christmas puzzle image, or even in the top ten. The scene appears to have been created in 3D and then rendered as a flat image. I don’t love the 3D look of the art, and find the elves faces a bit unattractive. Personally, I prefer the 2D paintings of past years, but that’s purely subjective. To be sure, the image is certainly Christmasy enough. I like the Santa and the fact that the various items from the “Twelve Days of Christmas” (lord’s aleaping, etc) are hidden within the image.

A more practical issue with this image with that there is a ton of brown and overall it’s fairly dark, darker than the picture on the box. 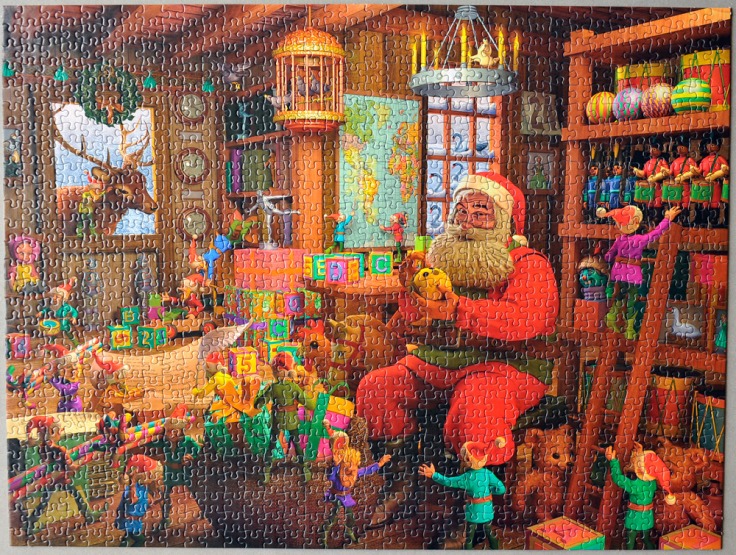 Having been doing my ‘brand comparison’ lately, I’m more sensitive to quality than I used to be. Besides the nice box, the image reproduction is good, and there was no puzzle dust or issues with the image peeling off the puzzle backs. I did, however, find the Waddington’s pieces to be thin compared to Ravensburger and Gibsons. The pieces are about half the thickness of Ravensburger. I’ll be doing a full brand comparison on Waddington’s but for the purpose of this review I’ll just say that the quality is ‘good enough’ for me to continue to buy the series, but I am disappointed in the puzzle thickness, especially since most other UK brands tend to be thicker. The thinner nature of the pieces was definitely noticeable whilst working the puzzle.

The piece cut is a standard grid with good variety. I never had any confusion over whether a piece fit or not. 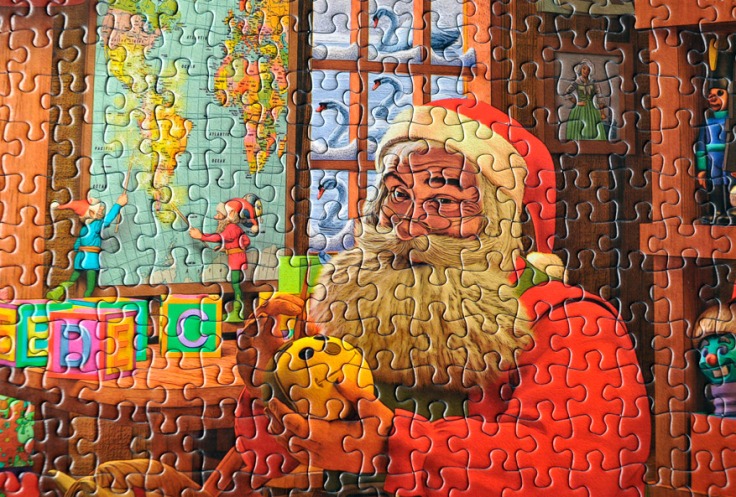 I’d rate this puzzle as ‘easy-to-medium’. I assembled the border, then all the colored areas first. At the end I was left with a whole lot of brown pieces. While it wasn’t that difficult to see the textural differences in the brown paper vs the brown basket vs the brown bookshelf, etc, it was less interesting than the colored parts of the puzzle and dark under artificial lights. There is a glossiness to the pieces which does cause light glare. 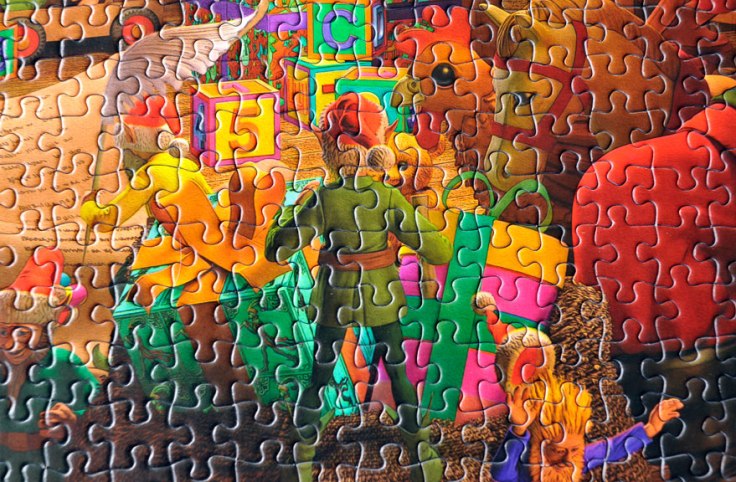 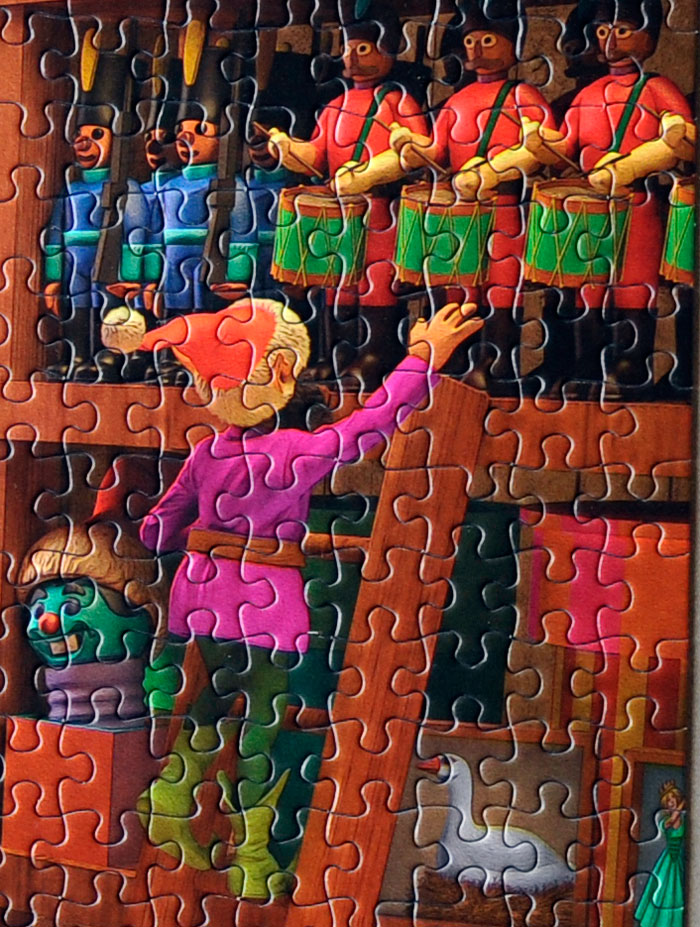 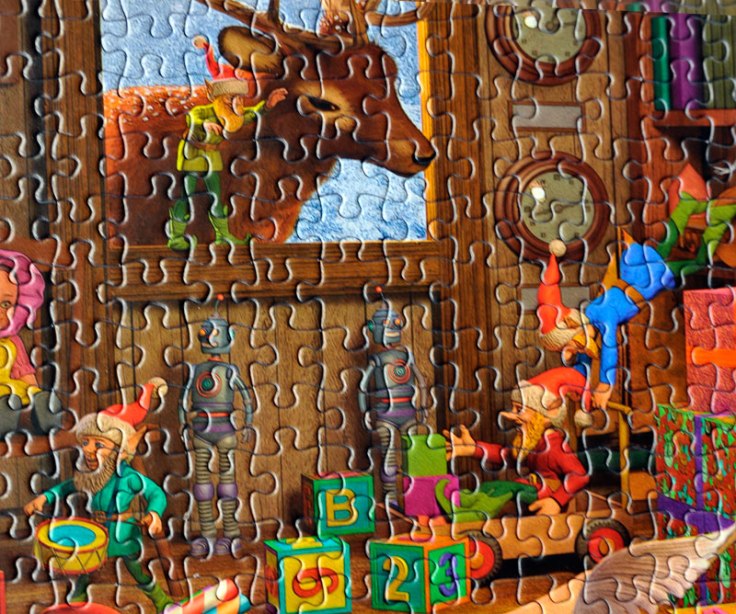 If you really like this puzzle image, or collect the Waddington’s Christmas puzzles, you’ll want to pick up this one. While not my favorite Waddington’s, it’s still a fun Christmas puzzle and, let’s face it, a holiday tradition! I’m already looking forward to next year’s offering.

Here’s a link to the puzzle on Amazon US and Amazon UK.

You can find other great Santa Puzzles here