Publisher: Jumbo (Netherlands), 2014, 2 x 1000 pieces Title:  “Mystery Shopper”, Artist: Geoff Tristram OUR RATING: 8/10 This is the tenth Christmas puzzle released by Wasgij. This year, you can only buy it in a set of two. The two puzzles are the box image and the wasgij image.  The wasgij image is a cartoon of what the... 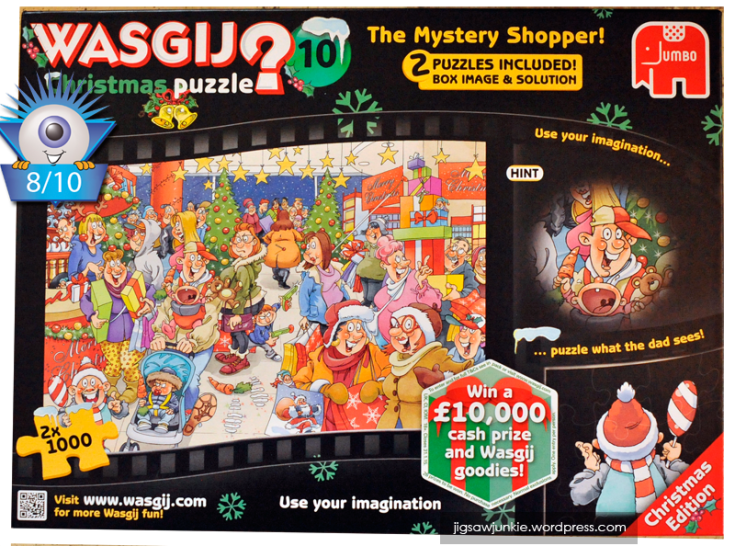 This is the tenth Christmas puzzle released by Wasgij. This year, you can only buy it in a set of two. The two puzzles are the box image and the wasgij image.  The wasgij image is a cartoon of what the people in the box image are looking at (so a 180 degree camera view turn).

The box is quite lovely, thick and sturdy. The back of the box contains another copy of the box image and information about how the puzzle works. There are a few hints about the wasgij image on the back. Looks fun, doesn’t it?

Here are the sides of the box. One long side shows other recent puzzles in the wasgij line while the other focuses on this puzzle. I like having the “Wasgij? 10” logo large, because for those who collect them all, they look nice on the shelf side by side, ordered by number.  There’s also similar info on one short side, in case you want to shelve it that way, and the other short side has information Jumbo quality. Overall, a great box. 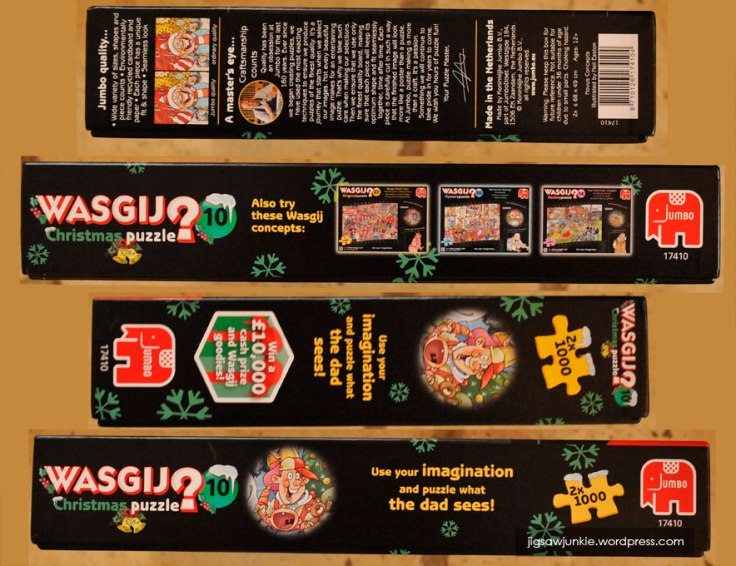 The Two Puzzle format and Confusion over which puzzle is which:

So this year, if you wanted the Wasgij Christmas puzzle, it was ONLY released in this two puzzle set. So, naturally, it is more expensive than past years (£19.99 vs £12.99).  Personally, I am only interested in the wasgij puzzle, not in putting together the box image. The point of a wasgij, to me, is not knowing the image you’re putting together. Sure, I put together other puzzles that match the box image, but in this case the wasgij image will be pretty similar to the box image, so do I really want to do two puzzles so similar? No, I don’t.  Plus, let’s face it, the box image is the set-up of the joke, not really a stand-alone image. So being forced to buy both and pay more is not a plus to me. Please let me buy just the wasgij puzzle!

OK, so then the second problem! The box comes with two separately bagged puzzles.  Planning only to do the wasgij puzzle, and leave the box image puzzle in the box unopened, I pull out the two bags. In each bag is a little slip of paper that’s supposed to identify which puzzle is in which bag.  Here’re the two slips of paper: 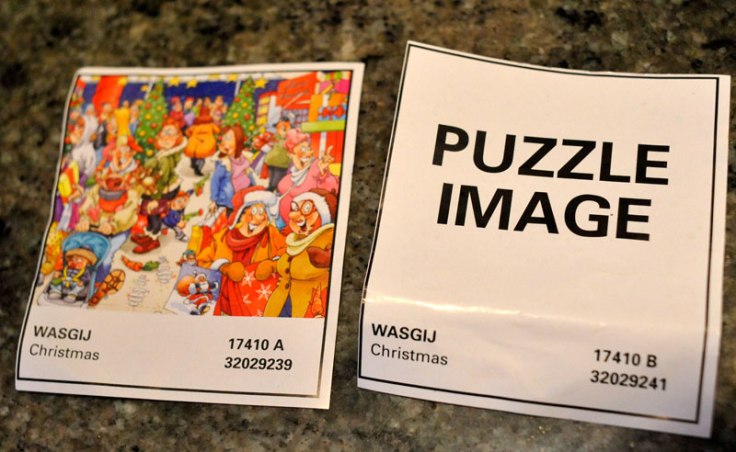 In the end, I was left feeling that, not only was I forced to pay for a puzzle I didn’t want, I was also forced to work it! Now, my puzzle time is precious.  I have many puzzles on my TBD list, so spending a few nights doing a puzzle I don’t want to do is, in a word, irritating.

It’s because of this issue that this puzzle is rated an 8. If it had been just the wasgij Christmas puzzle, I would have given it a 10. The wasgij puzzle itself is very nice and I love Geoff Tristram’s art and sense of humor.

The puzzle quality of Wasgij, being a Jumbo brand, is excellent. (See our brand review here).  The pieces are thick and have a non-glare, almost waxy finish which feels really good in your hand. The image is very sharp.

The Image (the box image):

The box image puzzle is shown below. It’s a cute and colorful cartoon scene in which everyone is looking at something off camera. 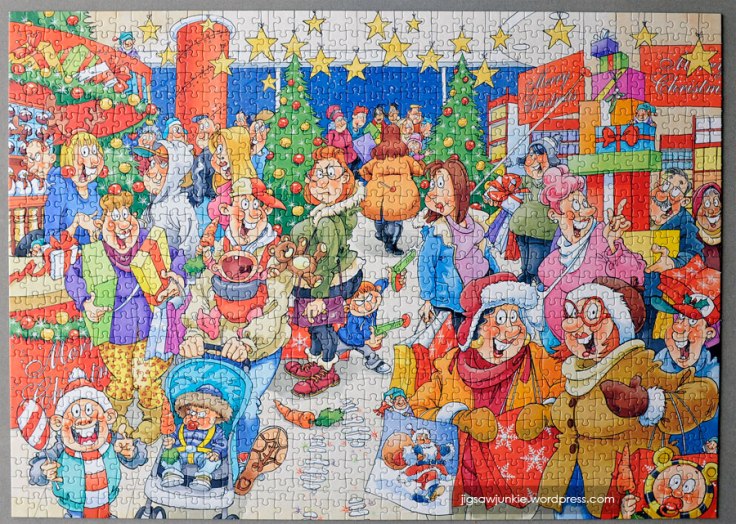 Assembly of the box image puzzle was easy, with all the figures having large areas of colors and patterns that were easy to identify. Below are some close-ups. 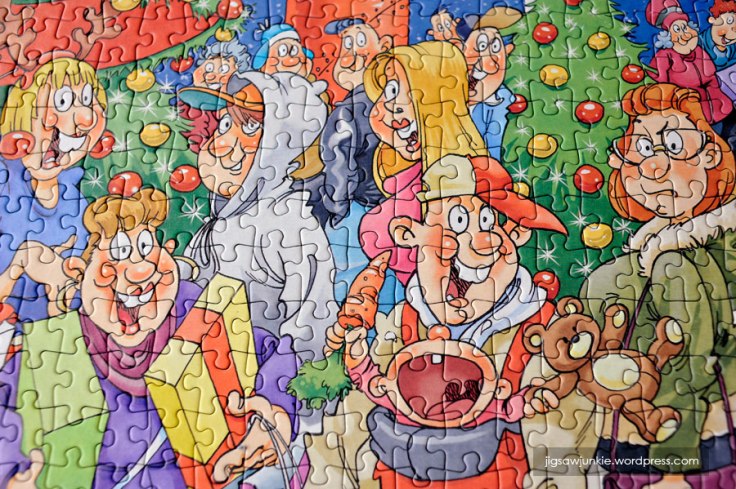 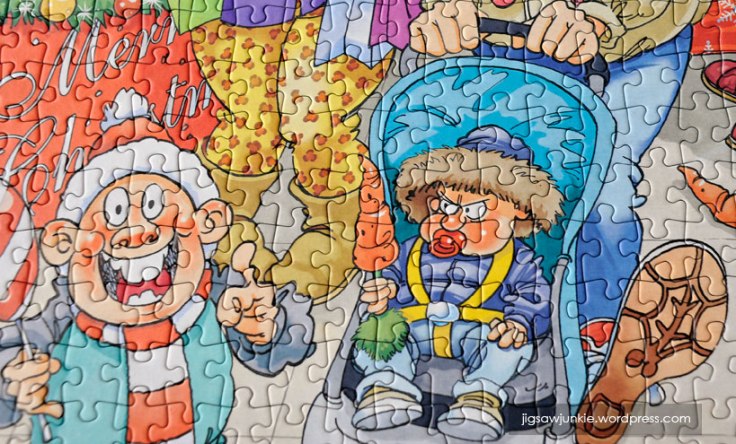 So what is everyone staring at?  Apparently, it’s not a monster or something since the people look happy to see whatever it is. The wasjig puzzle is very cute. It’s set in the same store, and there were some new store/architecture features that were fun to figure out.  Almost all the figures in the wasgij image are new (not seen in the box image).

Below are some close-up details from the wasgij image. 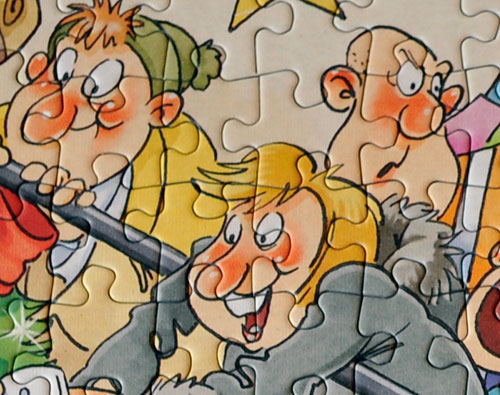 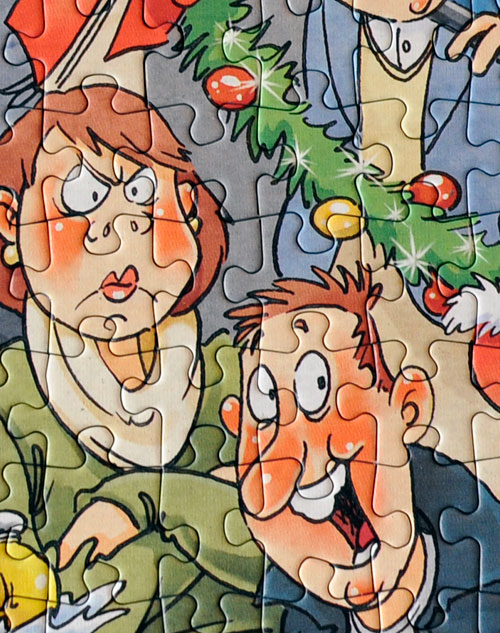 Definitely pick this up if you like the wasgij puzzles. It’s a good one. If you don’t intend to do both puzzles in the boxed set, examine your bagged puzzles with care rather than depending on the tags. There are some colors and patterns in the wasgij puzzle that aren’t in the boxed image, so you should be able to tell which is which. 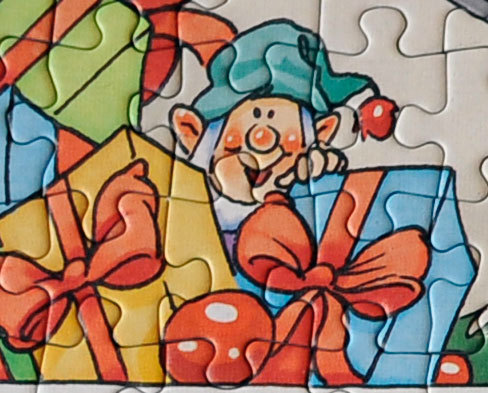 Here it is on amazon UK

And here on amazon US

And be sure to check out www.PuzzleWarehouse.com for more Wasgij Jigsaw Puzzles