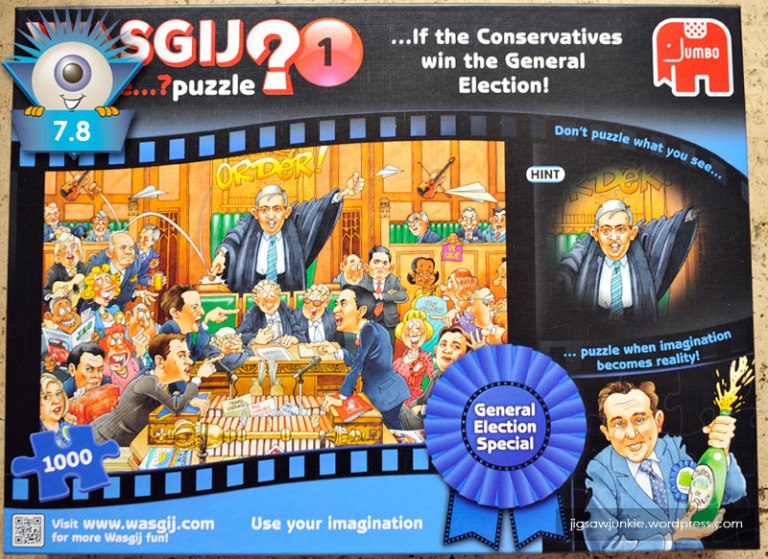 Review: “Wasgij Imagine #1: If the Conservatives Win the General Election” 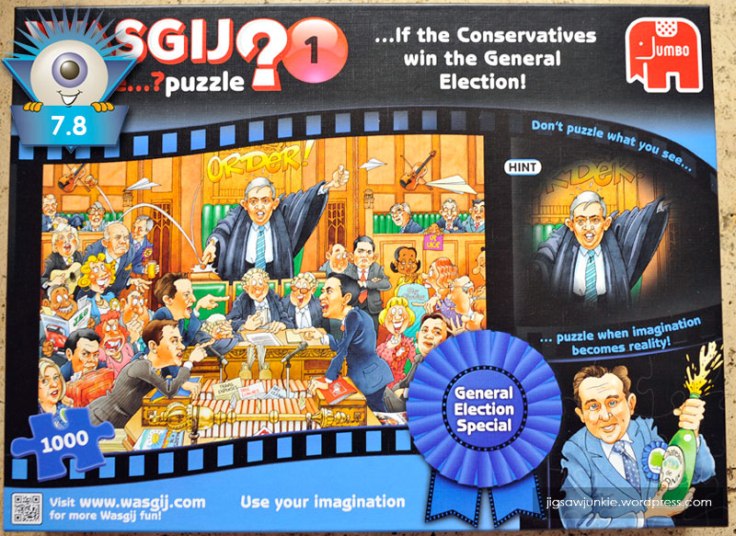 It was a rather exciting announcement when Jumbo gave us a look at a new Wasgij series called “Imagine”. The fact that they felt confident enough in it to release three different puzzles as part of the “#1” release in the series certainly peaked my curiosity.

Here’s my review of the “Conservatives” edition of this puzzle.

The Jumbo box is sturdy and very attractively designed. You can see the front above. The back tells us more about the concept behind the puzzle. 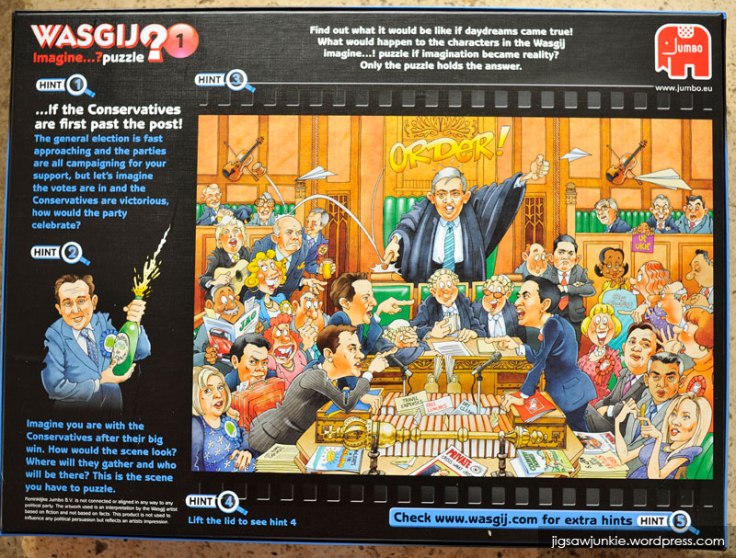 The sides of the box focus on the image and the “Wasigj” logo. I’m glad they have the “Imagine” and “#1” on the sides since those really help when shelving the series.  The artist really isn’t touted much on this box. In the fine print on one short side is says the artist’s name is Neil Easton. 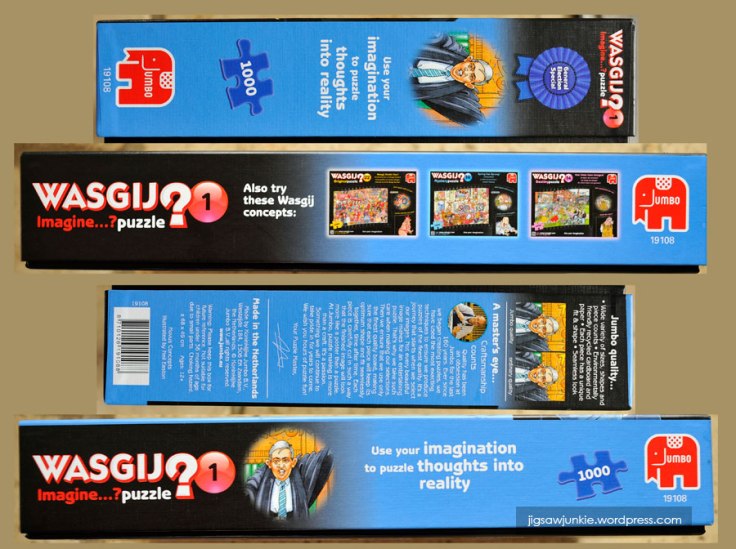 Inside the box is a bag with the puzzle pieces (in excellent condition, no damage, puzzle dust, or unseparated pieces). There’s nothing else in this box. There are some pictures of other puzzles in the Wasgij line printed on the inside of the bottom.

You can see my Jumbo brand comparison here.  To sum: Jumbo is an excellent brand. The pieces are good-sized and thick and the image reproduction is excellent. The pieces have a grid cut, but there’s a nice variety of piece shapes. You never think a piece fits where it does not. The surface has a linen like finish that feels nice and is non-reflective. This puzzle is no exception to that usual high quality.

My hope for this 3-puzzle series went something like this: each puzzle image would be a take on what England would be like if that party won the election. For example, a London street with conservatives ruling vs the same London street with hippies ruling the day, etc.  Perhaps some clever visual references to various policies each party had promised. What I was hoping it wouldn’t be was images of British political celebrities whom I didn’t know as a non-Brit.

Unfortunately, the puzzle image is the latter. The puzzle scene is a simple outdoor scene with a number of politicians holding a small celebration. The bulk of the image consists of caricatures of real life politicians, up close and in simple poses. The background of this scene is very basic – a bit of a wall of a castle or manor and some greenery.

Compared to images like “What If: Dinosaurs Still Rules the World” (here’s my review), which showed several streets and a park (with various characters), this puzzle image is very simplistic.  It could have been made interesting even to those who don’t follow British politics by widening the view and having more going on in the picture—more detail, more design, more colors, more sight gags. Unfortunately, that wasn’t done.

Not to sound ignorant, but as an American, the only people I’m really familiar with in British politics are the royal family and prime minister. Of course, we do hear about big issues over here, like gay marriage, the Scotland independence vote, etc, but we’re not privy to the finer details of the British political parties. So the people in the image were not familiar to me at all. Of course, with the internet anyone could follow British politics closely, I suppose, but probably doesn’t. In fact, I wonder how many Brits follow it that closely.

I’ve included a few detail close-ups of the image in this review. You can see the entire image at the link below if you don’t plan to purchase the puzzle and/or don’t mind a huge spoiler.

(Click here to see the final puzzle image. ****WARNING: This is a spoiler if you intend to do the puzzle.****) 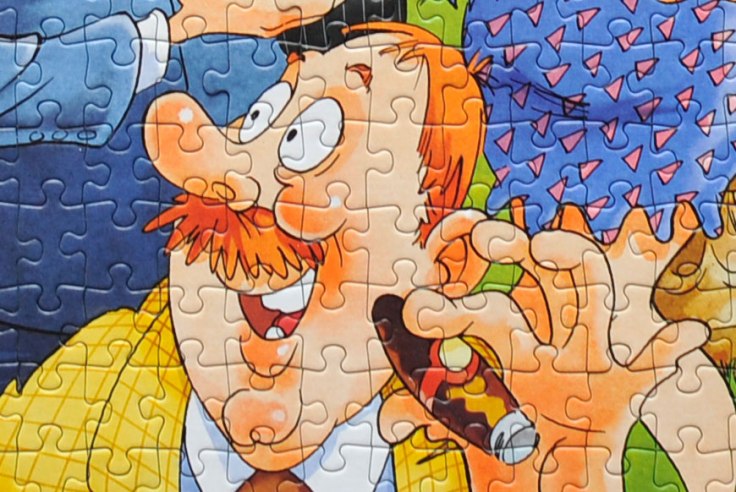 What I enjoy about wasgij puzzles is that you need to take a different approach for assembly because you don’t know what the final image is going to be. So I usually do the border first and then look for colors and patterns that are similar and put those together in groups. As you get more and more of these small areas complete, you start to see how they interconnect and you can move them around until you have enough done to lock down the final image.

Another thing I didn’t particularly like about this puzzle image was that there weren’t enough variety of colors and patterns. Nearly all the characters are in blue. Generally there’s more variety than this in wasgij issues. It wasn’t a particularly hard puzzle to assemble, and still fun, but a little bland compared to other wasgijs. 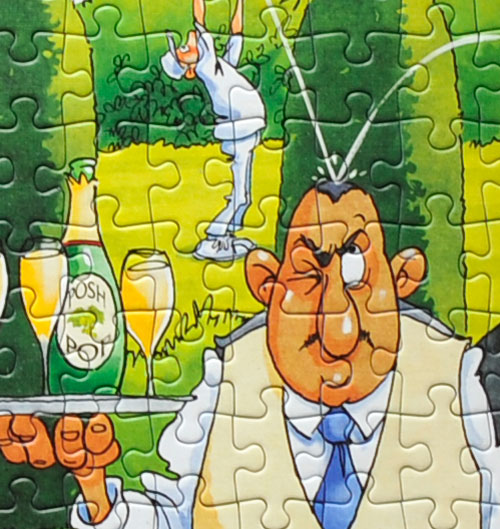 I remain a big fan of wasgij puzzles. But if you’re not a follower of British politics, there are better and more interesting Wasgij puzzles to get. I’d suggest the first two in the “What If?” series – “What if Money Grew on Trees” and “What if Dinosaurs Still Roamed the Earth”, both of which are outstanding puzzles. Or any of the recent Wasgij Original, Mystery, Destiny, or Christmas series releases, for that matter.

It’s my understanding that Jumbo has terminated the “What If” series (probably due to a legal conflict with Ravensburger’s “What If”) and will be calling it “Imagine” moving forward. This was just the first release of that new series. I look forward to more releases and hope they are more similar to the first two “What If” releases by Jumbo.