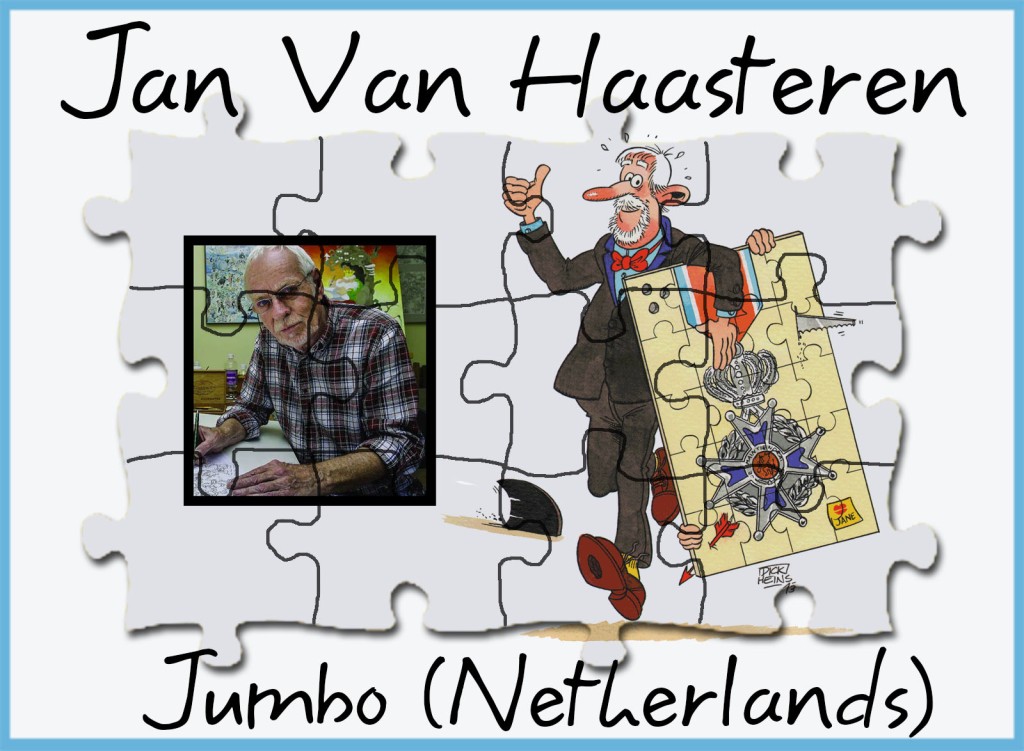 Jumbo kindly sent me a translation of this article commemorating Jan Van Haasteren’s 30th anniversary of making puzzles.  It appeared in De Telegraaf, a Dutch newspaper, on October 26, 2014. Here’s a translation with my own images of Jan’s work added. 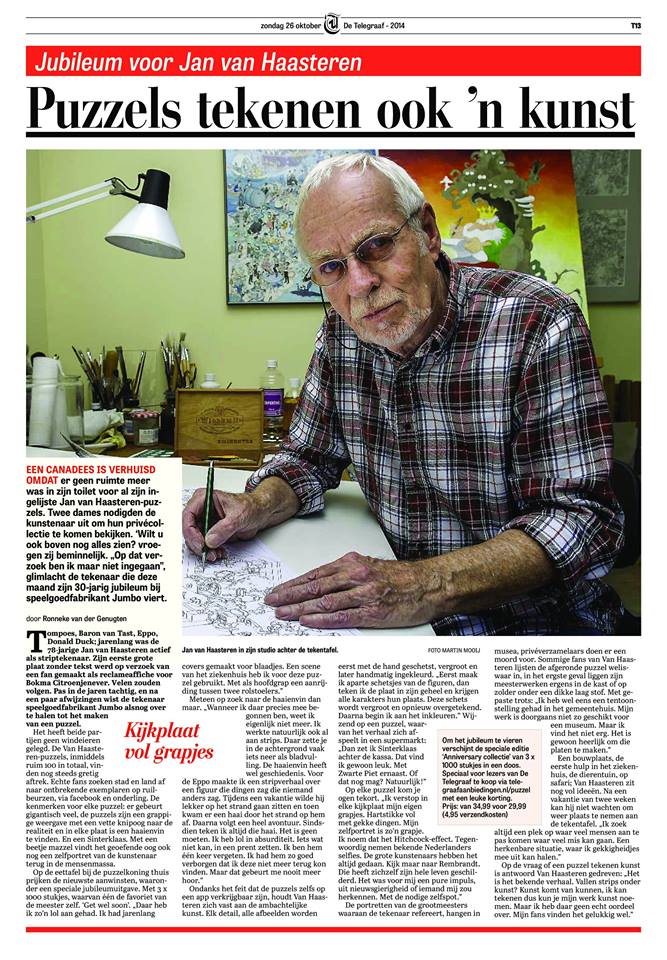 A Canadian moved to a new house because his bathroom was not big enough for all his framed Jan van Haasteren puzzles. Two ladies invited the artist to their home to show him their private collection. When they asked if the artist also wanted to see the collection upstairs, he politely declined. The artist recounts the incident, smiling. He’s celebrating his 30-year anniversary with Royal Jumbo puzzle company.

Tompoes, Baron van Tast, Eppo, Donald Duck: the 78-year old artist has been active as a cartoon artist for many years. His first large image without text was made at the request of a fan and used as an advertisement image for Bokma Citroenjenever. Many more would follow. Only in the ’80, and after a couple of rejections, did the artist get the idea to convince Jumbo to make puzzles from his artwork.

Above: A detail from the 30th anniversary promo material.

It has been a successful collaboration for both parties. The Van Haasteren puzzles, now amounting to about a hundred, are still popular today. Real fans search for hours to complete their collection. The trademark of every puzzle: there is a lot going on, the puzzles are a funny look on reality, and you can find a shark’s fin and a Sinterklaas (Santa Claus) in every puzzle. With a little luck the trained eye can also find Jan van Haasteren’s self-portrait in the crowds. 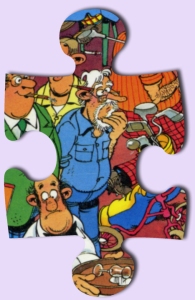 Above: Jan’s self-portaits from the puzzles “19th Hole” and “Crazy Casino”. You can see more of these, collected by an ardent fan, here.

At home on the dinnertable of the puzzle king himself are the latest editions released. Among those is a special anniversary box. It comes with three 1000 piece puzzles: one is the artist’s favorite, one is the favorite of the fans and a the third is a brand new puzzle image. 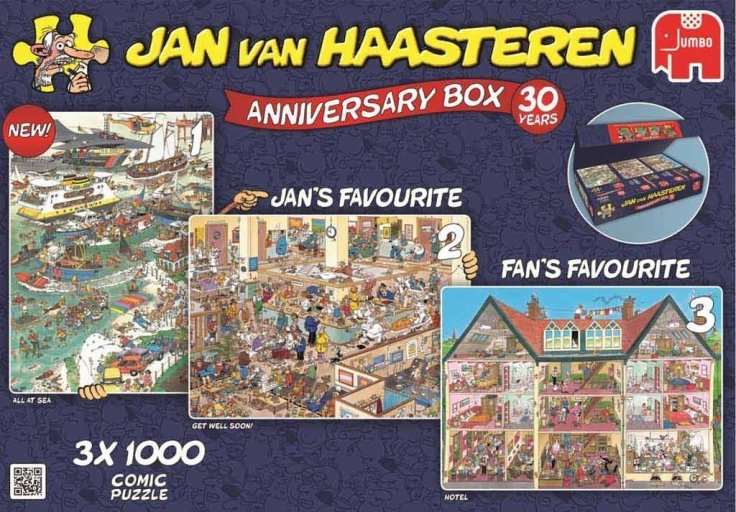 “Get Well Soon” is Jan’s favorite. “I had so much fun with this. Years ago I made covers for magazines. I used a scene from a hospital for this puzzle.” The main joke in the image is two wheelchairs bumping into each other. 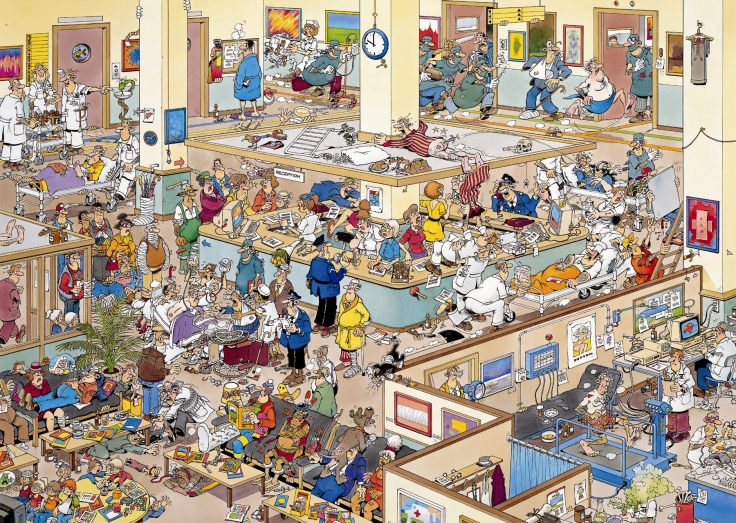 Immediately I’m looking for the shark’s fin. “I can’t remember when I started drawing this. I worked on comic books too of course. A lot of times I put something in the back ground to fill the image. The shark’s fin does have a story. For Eppo I made a comic book about a person who saw things nobody else could see. During his holiday he wanted to sit on the beach and there a shark came for him. A whole adventure starts there. Since then I always draw a shark’s fin. It is not that I have to, I just love absurdity, to put something in an image that should not be there. I forgot it once. I hid it so well that even I could not find it. But that will never happen again.”

Above: A sketch of Jan made by fellow cartoonist Dick Heins upon Jan being awarded the Ribbon of Honour in the Netherlands. 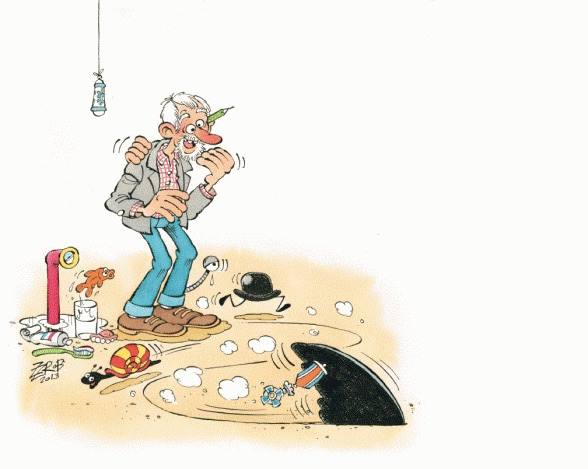 Above: A sketch of Jan made by Rob Derks upon Jan being awarded the Ribbon of Honour in the Netherlands. Rob works with Jan’s Studio and also has a new puzzle series of his own. (Pieces of History)

Even though you can also play his puzzles in an app, Jan van Haasteren firmly believes in the original form of art. Every detail and all images are first drawn by hand, then enlarged, and in a later stage the image is coloured by hand. “First I make separate sketches of the figures, the I draw the complete image and give all the figures a place on the image. This image is then enlarged and traced again with ink. Then I start colouring.” Pointing to a puzzle where the scene is from a supermarket. “I put Sinterklaas behind the till. I just like that.” 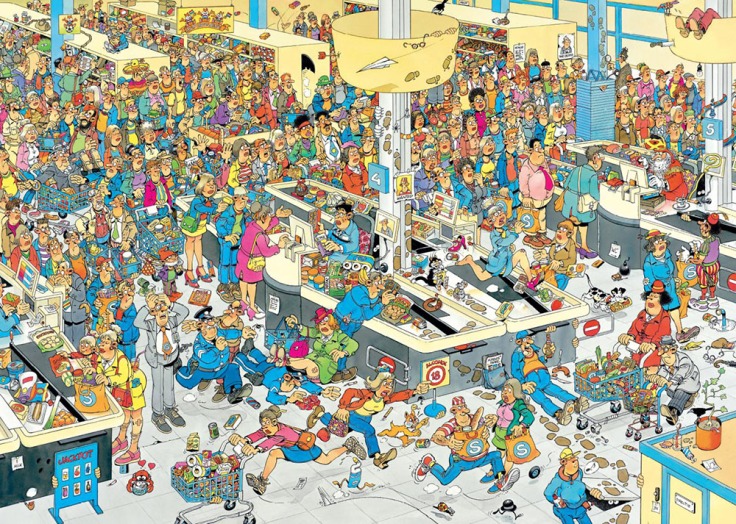 With each puzzle you wish you had more eyes to take it all in. “I hide my own jokes in each illustration. Make it completely full with crazy things. My own portrait is such a joke. I call that the Hitchcock effect. Nowadays people take selfies. The big artist have always done that. Look at Rembrandt, he painted himself his whole life. I started with it out of an impulse and I was curious if someone would recognize me,” he says with self-depreciation.

Portraits of the masters to whom Jan refers to are to be found in large museum. Private collectors would die for a painting like that. Some Van Haasteren fans frame a finished puzzle. In the worst case his master pieces are stored in a cupboard to collect dust. With pride he says: “I did have an exhibition in a city hall once. My work is usually not appropriate for a museum. But I don’t mind. I just love to make these illustrations.” 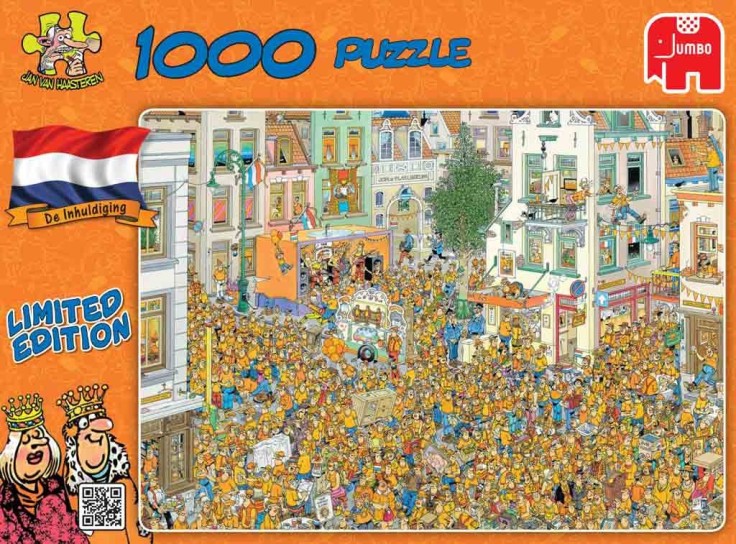 Above: “The Inauguration”, published on the inauguration of King Willem Alexander of the Netherland in April, 2013

A building site, hospital, a zoo, going on safari; Van Haasteren has many ideas. After a two week holiday he can’t wait to be behind his drawing table again. “I’m always looking for a place where something can go wrong. A recognizable situation where I can create funny jokes.” 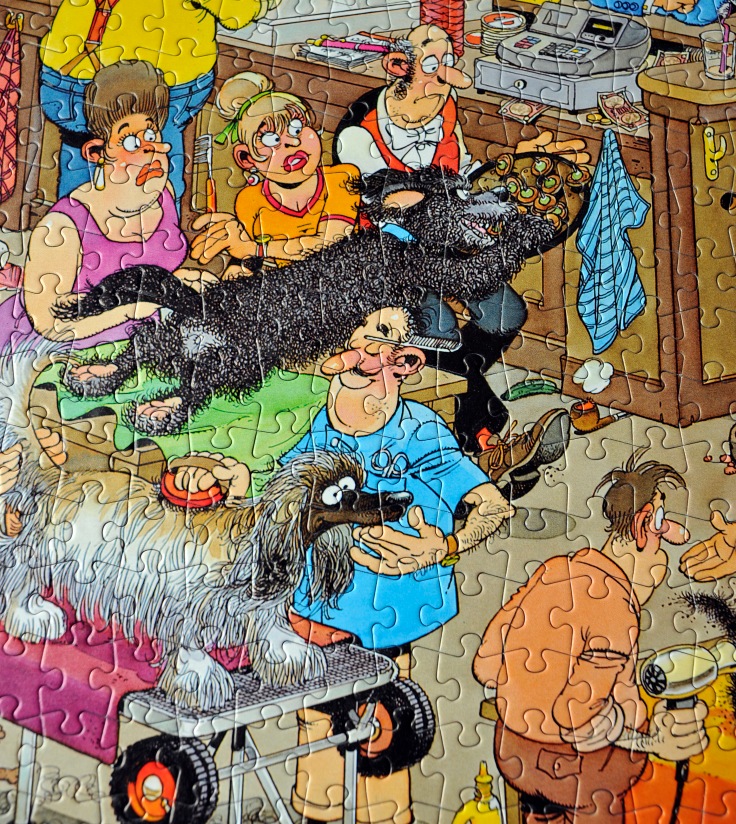 To the query if illustrating a puzzle is a form of art van Haasteren replies: “It is a familiar question. Are comics art? Art comes from being able to create something. I can create these illustrations, so you can call my work art. But I don’t really have an opinion. Fortunately my fans think so.”

JVH-puzzles.nl — A combination fan site and online retailer with lots of reference on Jan and his older puzzles and the latest news on upcoming releases. This is a good place to find obscure, European releases and out of print puzzles.

JVH puzzles on amazon.com — NOTE: JVH puzzles are published by Caeco in the US, which has a non-standard grid cut but cheaper, flimsier pieces. I prefer the Jumbo brand, which is an import and thus more expensive.

Jigsaw Jungle (Canada) — Tons of JVH puzzles are reasonable shipping for the US and Canada.