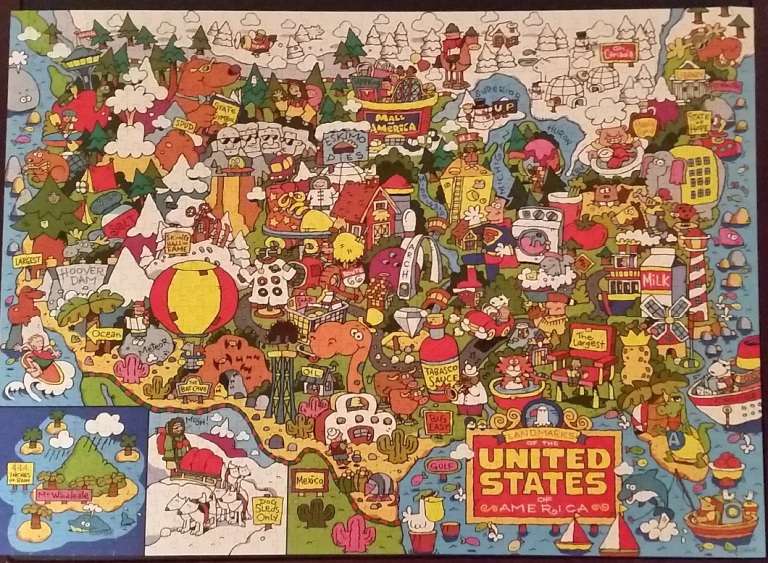 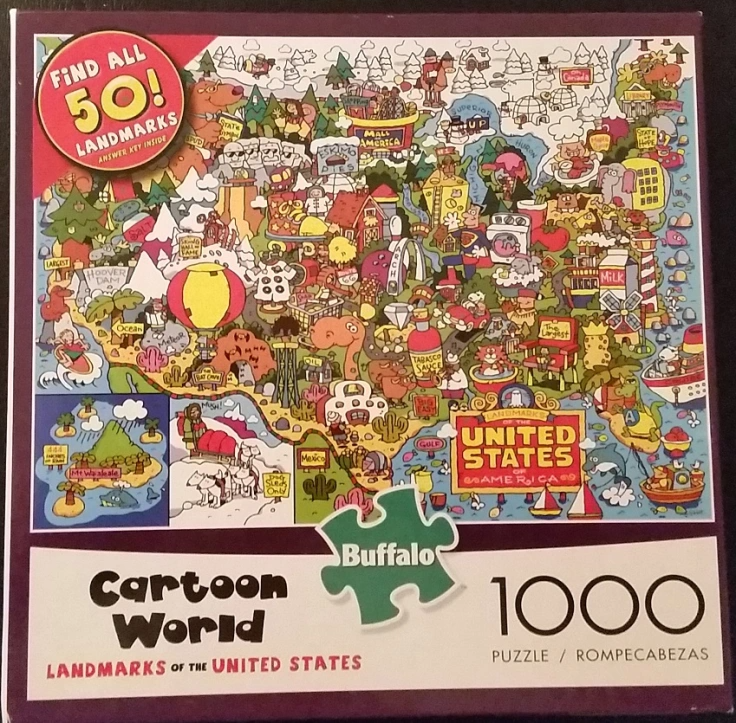 Buffalo Games is my favorite puzzle brand, and as you can tell by my rating of 10/10, this one did not disappoint!

Buffalo isn’t known for its “busy” cartoon puzzles, but they have three by artist Dave Garbot that are a lot of fun.  I am reviewing Landmarks of the United States, part of their Cartoon World series.

Buffalo keeps their puzzle boxes at a standard 8×8-inch, making them easy to shelve.  The box is sturdy and the image on the front is colorful and sharp.  The artist’s name is on one side of the box.  Don’t be concerned about the size of the image on the box, as Buffalo includes in every puzzle a nice poster so you can easily see the detail.

This company is very eco-friendly.  They use 100% recycled paperboard, the box is not shrink-wrapped, and the pieces are loose in the box instead of coming in a plastic bag.  This means the box comes sealed around the inside with glue, so I slip a table knife around the edges to open it.  This can cause a little bit of tearing of paper on the inside of the box lid, but that’s the trade-off for the lack of plastic.

My only quibble with the box is that the back doesn’t have any info on other puzzles in the series, which would have been nice.  On the plus side, this does mean that the company saves having to come up with a different box bottom for each puzzle, which in and of itself is probably eco-friendly as well. 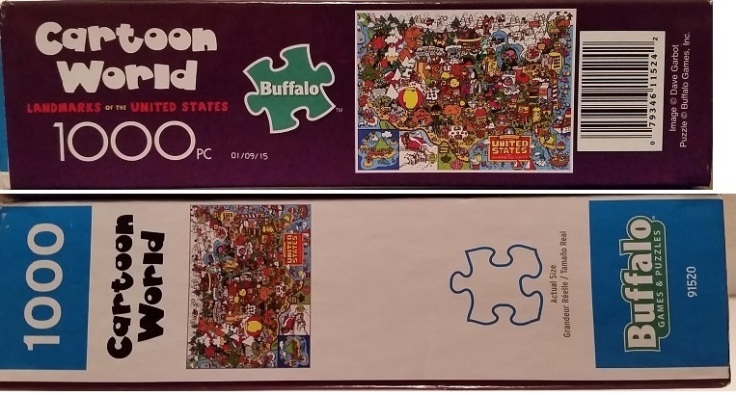 The image is a cartoon of 50 landmarks around the U.S., one for each state. It is reproduced perfectly and is very sharp.  While some of the landmarks are easy to figure out (or even given to you, as in the case of The Mall of America), there are several I wouldn’t consider to be “landmarks” per se, but it’s fun to try to guess them anyway. 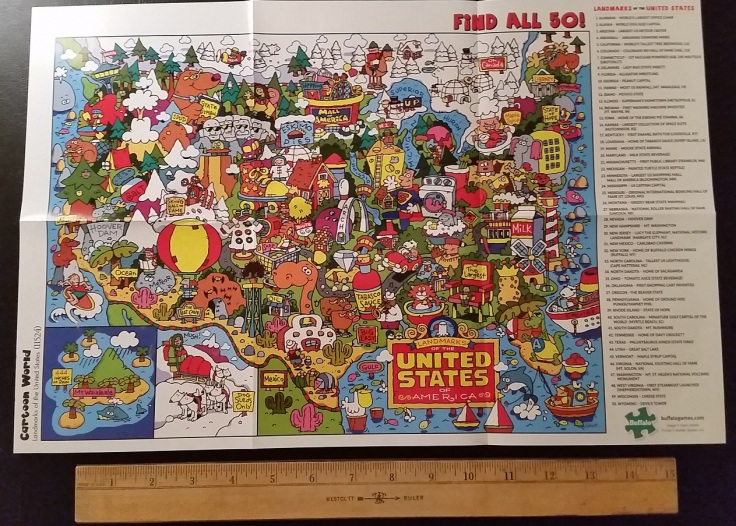 Buffalo includes a poster of the image with every puzzle.  It’s large enough to see the detail but small enough to hold in one hand while you work.  I was wondering if the key to the landmarks would be on a separate sheet, but it was printed on the side of the poster instead.  I was able to ignore it and just paid attention to the image until I had it all together, but if you want to try to figure the landmarks out on your own (and can’t trust yourself not to peek!) you could fold that part of the poster back until you’re done.

Buffalo makes excellent quality puzzles.  You won’t find puzzle dust, hanging chads or pieces stuck together.  The pieces are thick and have a very tight fit.  If you like to hang your puzzles this brand would be excellent for that.

The cut is essentially a standard grid cut, with the exception that a few of the pieces have a zigzag on the sides, which you can see in the closeup picture below right above the man’s hat.  This is a trademark of Buffalo puzzles. 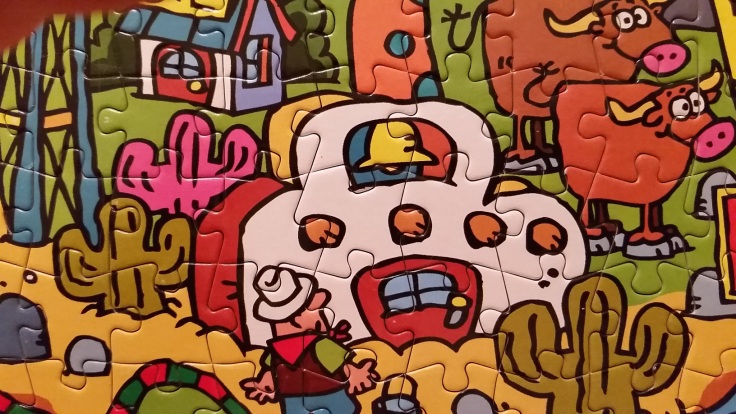 You can see from the detail pictures below the sharpness of the image and the tightness of the fit. 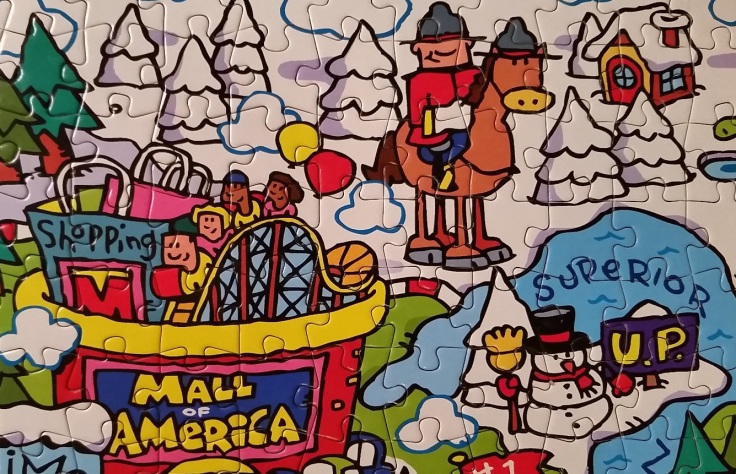 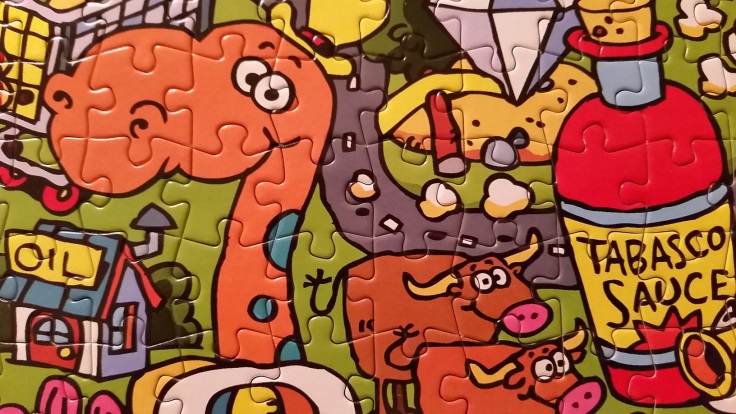 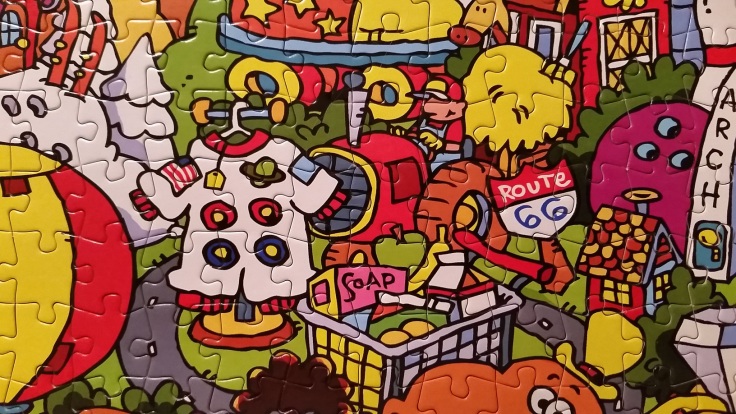 I’m always happy to get my hands on a new Buffalo puzzle, because I know assembling it will be a pleasure.  The challenge with this one was that the same crayon colors were used throughout the puzzle, so I found myself referring to the poster a lot.  You can’t really sort the pieces by color (with the exception of the mostly white ones, which I did sort out, as well as the ones with text), because most pieces have multiple colors in them.  I used my JigSafe to lay the pieces out so I could see them all without rummaging through the box – and to keep my cats out of things! 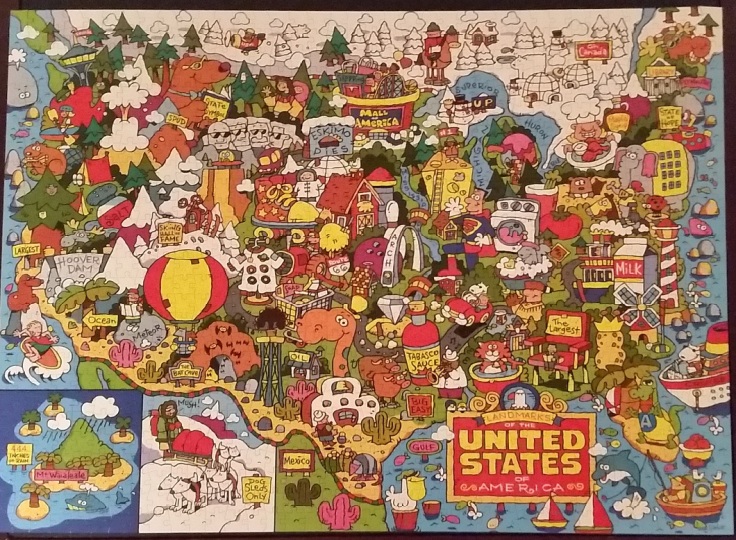 After putting the border together I worked on the ocean pieces first, then filled in toward the center from there, working my way toward the top.

With this brand the corners of each piece will always meet, so there’s rarely any problem determining whether a piece goes in a given spot.  The inclusion of the poster is a particularly nice aid for working with this kind of image.

I enjoyed this one so much I’ve ordered one of Garbot’s other puzzles, Hollywood.  Wonders of the World is the third of his puzzles in the Cartoon World series.  There are a couple of other puzzles in the series, but they’re not of the busy cartoon variety.

You can’t go wrong with a Buffalo puzzle, and this one was no exception.  The quality is excellent and the image will tickle your funny bone.  I hope Buffalo continues to add to the Cartoon World series.

You can also find it at Puzzle Warehouse