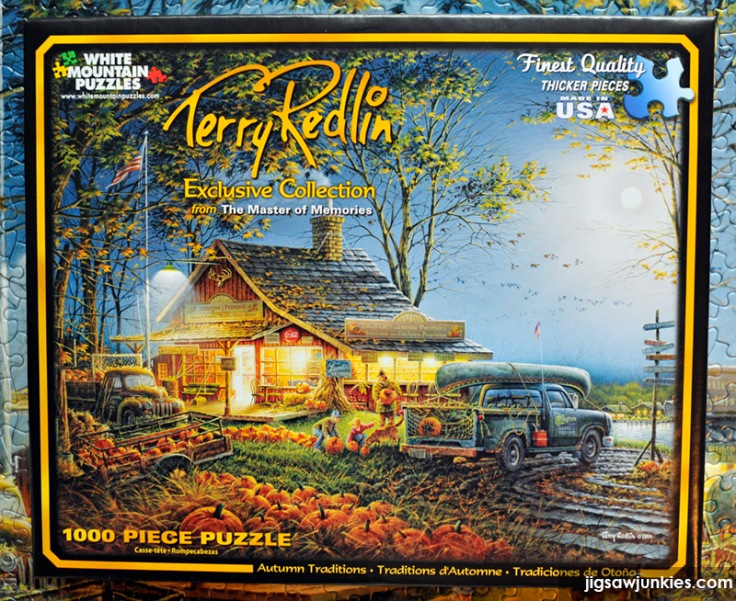 Fall is my favorite time of year and I know I’m not alone. This week we’re getting into the fall season by reviewing fall-themed puzzles. This weekend we’ll have a ‘top ten’ list of the best fall-themed puzzles on the market right now! Today’s review features a classic Terry Redlin puzzle from White Mountain. This puzzle comes in both 1000 and 300 pieces, so you can pick your level of difficulty.

This White Mountain puzzle is from 2014 and has the newer box design. The box front is shown above. The front shows the image, the puzzle title, and the piece count. It also heavily features the artist’s name, Terry Redlin. White Mountain carries a lot of Redlin images, so it’s essentially a series that has its own box design with the black and gold trim. The box size is roughly 10″ x 12″. The front of the box is the only picture you get of the puzzle image, but it is large enough to work from.

Back:The back of the box has a mini catalog with other current White Mountain puzzles and a blurb about the company. Much nicer than a white back! 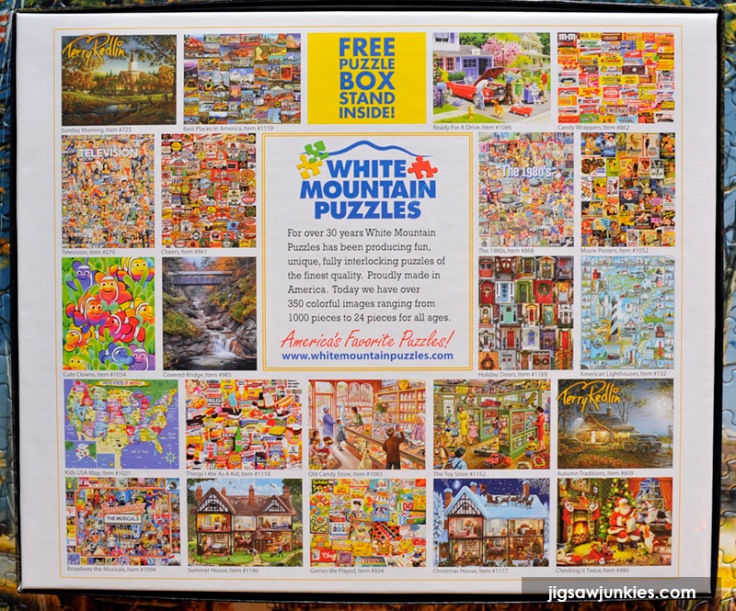 The sides feature an image of the puzzle, the piece count, puzzle name, the “Terry Redlin” logo, and White Mountain logo.  The year of manufacture (2014) is on one side. There is even a photo and bio of the artist on one side. Nice! I like that I can shelve this puzzle with any end outwards and have a one-glance reference to what the puzzle is. The Redlin collection also looks very nice shelved together with the black background.

Below is a close-up of the artist bio portion: 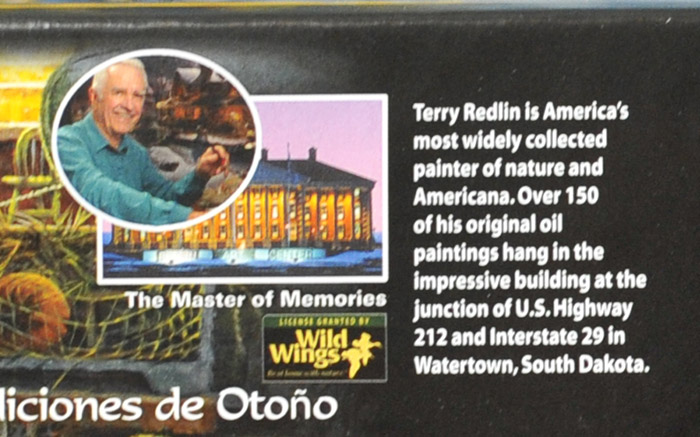 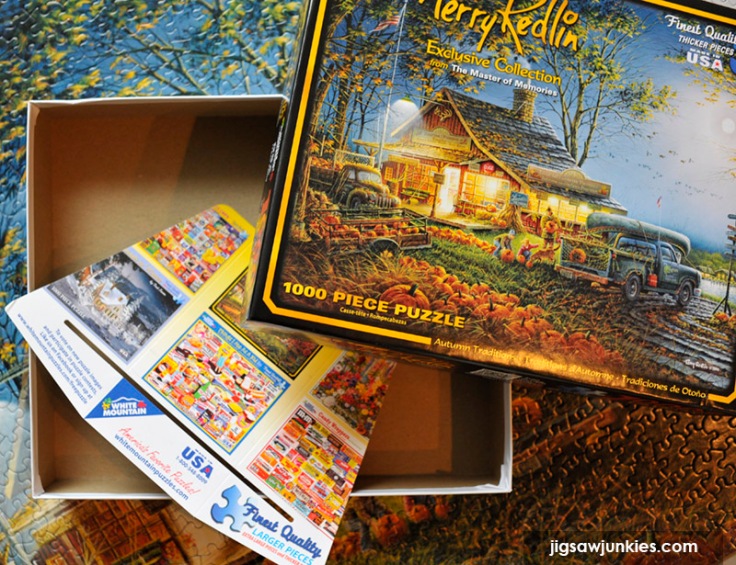 I really like this box and it has all the information I like to see. I’ve rated it a 9. I didn’t try the box stand out.

I like the way Terry Redlin’s Americana images look, but a few I tried in the past felt very dark to me during assembly, so I haven’t done one in awhile. I picked this one for our fall-themed puzzle week because I really like the amount of sheer pumpkin in this image. Seriously! There’re a lot of pumpkins. Also the colors looked a bit brighter, and I was in the mood to do another White Mountain.

Not surprisingly, this really is a lovely and fun puzzle to do. As you can see in the photo below, the colors are fairly bright for a Redlin image. I love the big field of pumpkins, the little country store with the glowing yellow lights, the sweet family picking out their pumpkins, and the orange-green-and-blue color scheme. Plus, it definitely has that nostalgia thing going with the old-fashioned trucks. It’s a very pretty puzzle when completed too.

I’m rating the image a high score of 9. There is a lot of sky, and the leaves-in-sky area is more difficult. I’ll write more about that under assembly. This image would have gotten a perfect 10 if those areas had been broken up a bit more. 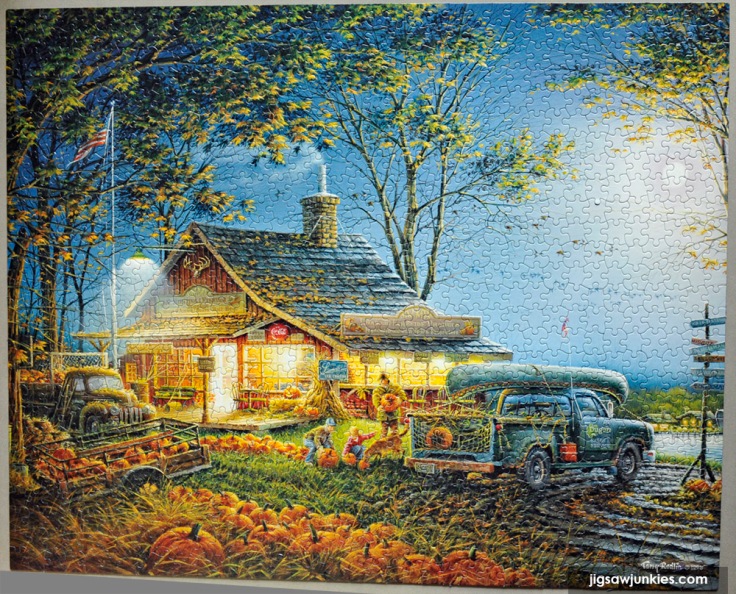 The good news is, if you like this picture, but think the 1000 pieces might be too hard, there’s a 300 piece edition that is zoomed on the store and cuts off the hardest part–the tree leaves in the sky. Below is the 300 piece version’s image. 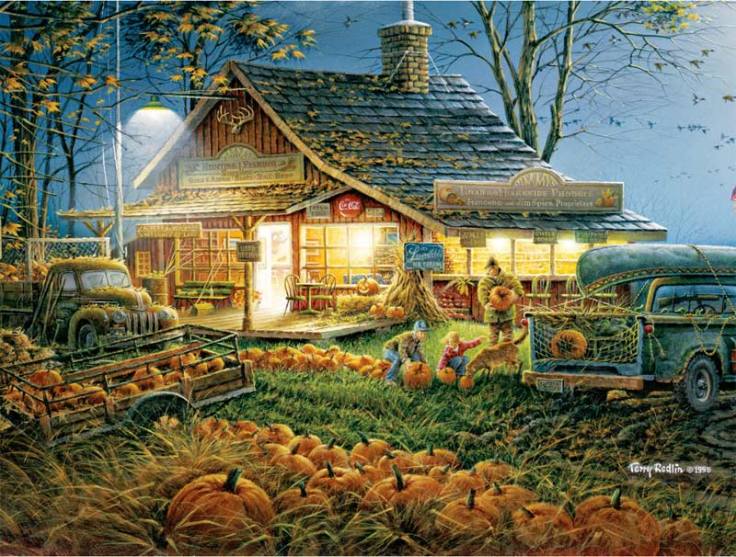 I recently updated my White Mountain Brand Comparison page. I quite liked the quality on their 2016 puzzle, “Winter Village“.

This Redlin puzzle has a similar quality. I did not have any image lift on this puzzle out of the box (image lift is when the top picture part starts to separate from the cardboard background).  I did, however, see it begin on one piece when I put it in the wrong spot and then had to take it out again. Even gently trying to separate the two pieces caused the image to begin to lift on one knob. Despite this, I consider the quality very good.

As I’ve mentioned in other reviews, I especially like the larger piece size (and final puzzle size) of the White Mountain puzzles, the random cut, and the very flat and seamless finish. As you can see in the close-up below, once assembled the puzzle lies very flat with no raised pieces and the cut really blends in. It’s not easy to separate the pieces, so you can move groups of assembled pieces around without them falling apart. There is a glossy finish, which can make dark areas, like the leaves in the sky, tricky to work under overhead lights. 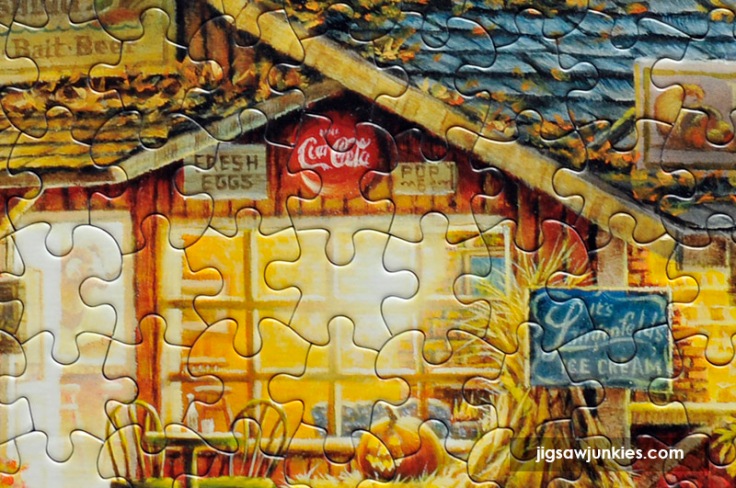 The image reproduction and color are very good. Because of the looser, painterly art style, the lines are not super sharp, but the image is clear and doesn’t look enlarged or fuzzy. 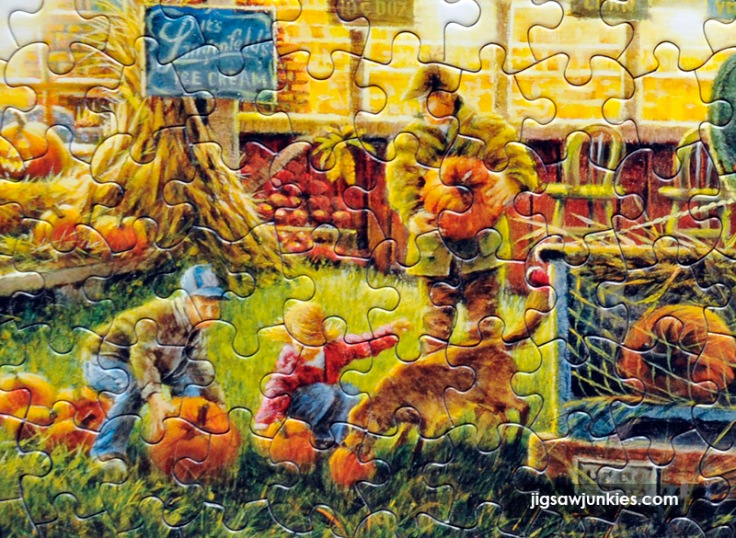 Note that because of the larger finished size, you will need to use a JigBoard 2000 for a 1000 piece puzzle like this one.

I’ve given quality a strong 9 score for this puzzle.

The first thing that went together was the border. The border was mostly easy except for the top and upper left where the leaves-on-dark-blue-sky are. After the border, I did the large pumpkins in the foreground. 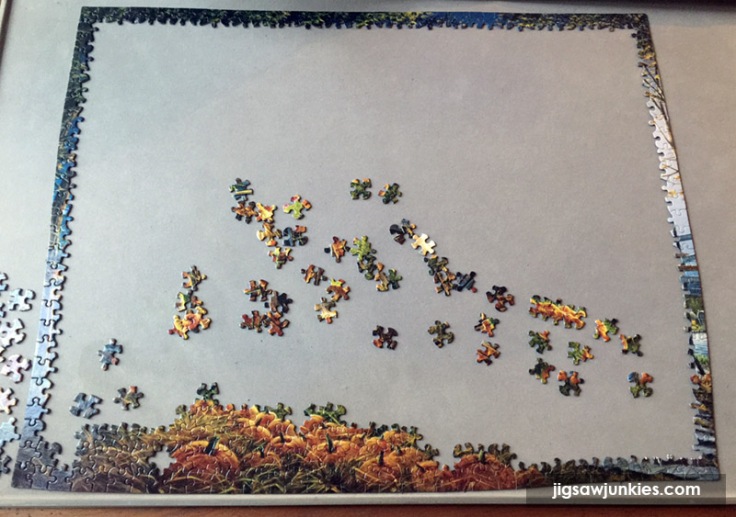 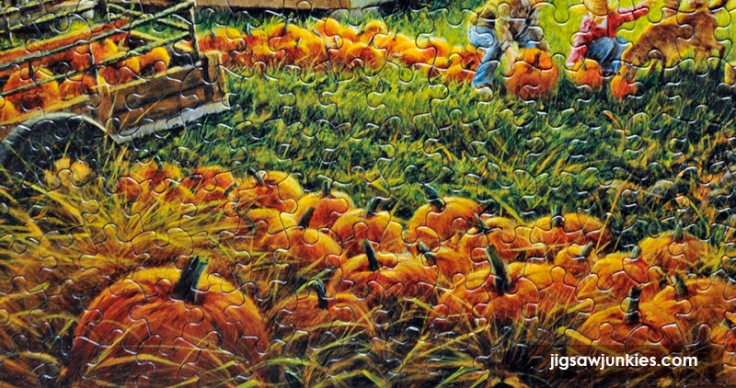 The store was fun to put together because of the bright yellow glow of all the windows. 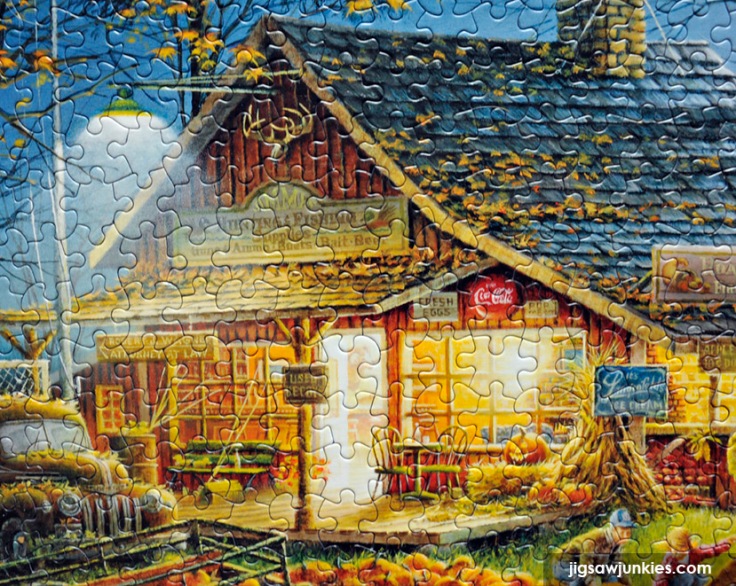 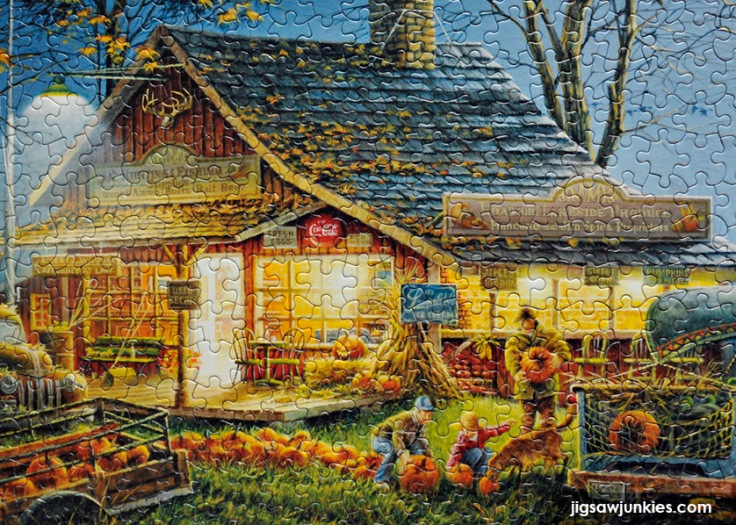 The area in the lower right has a circular mud pattern which is easy to identify on the pieces. The greenish tint on the truck and canoe is different than the blue sky so the truck isn’t difficult to assemble. 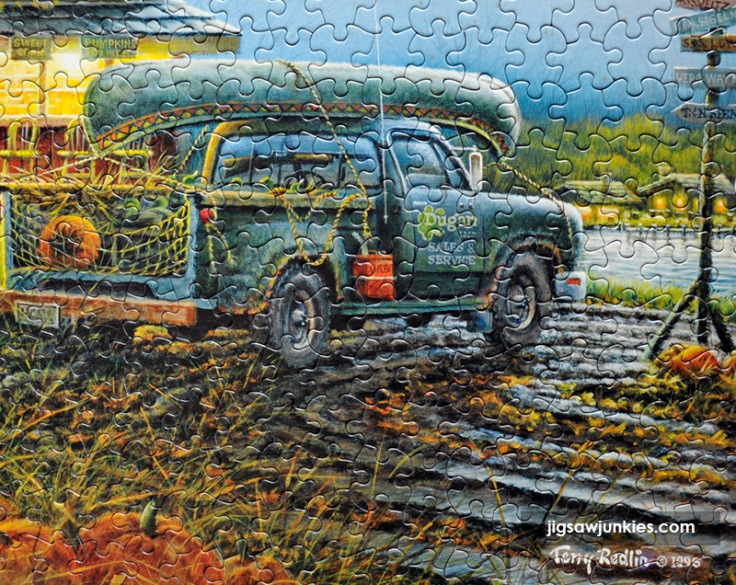 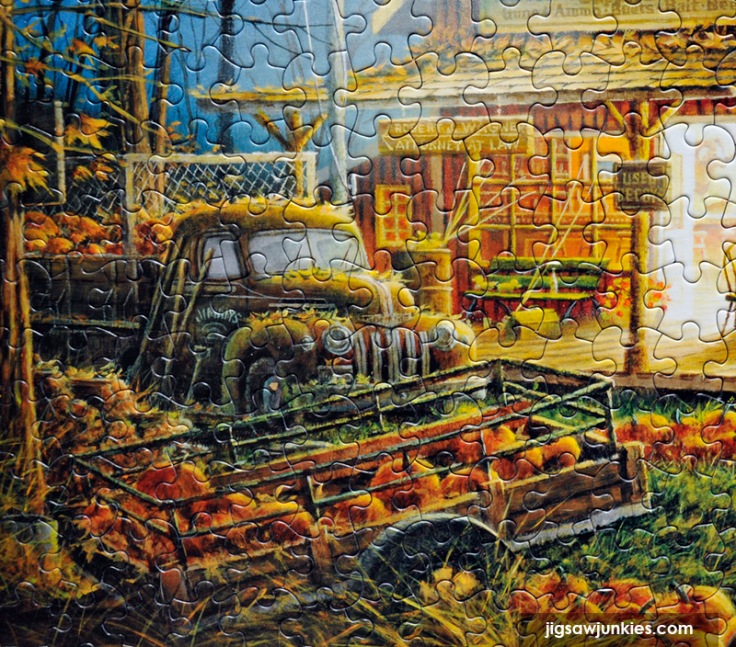 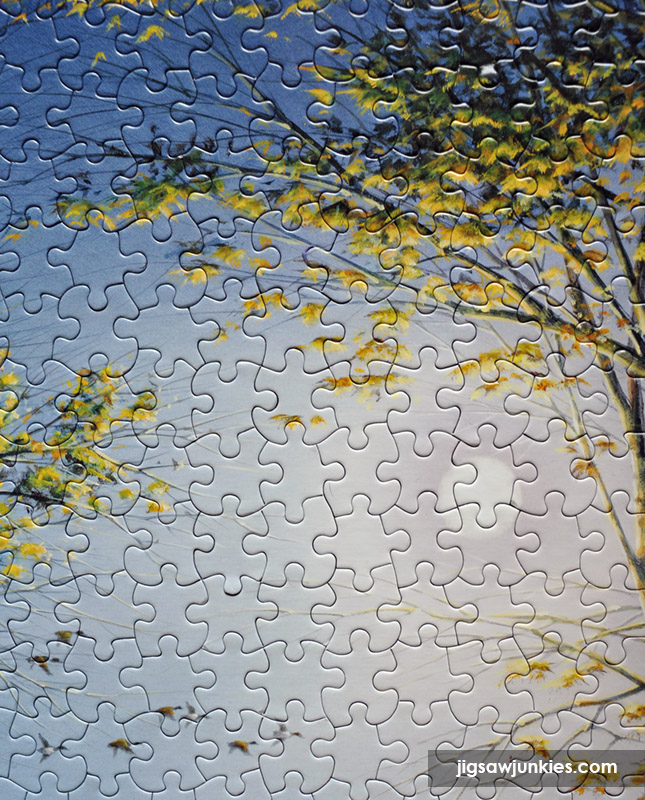 I gradually worked my way out into the medium and then darker blues. There’s some smoke around the chimney which provides a little texture change in the medium blue pieces. 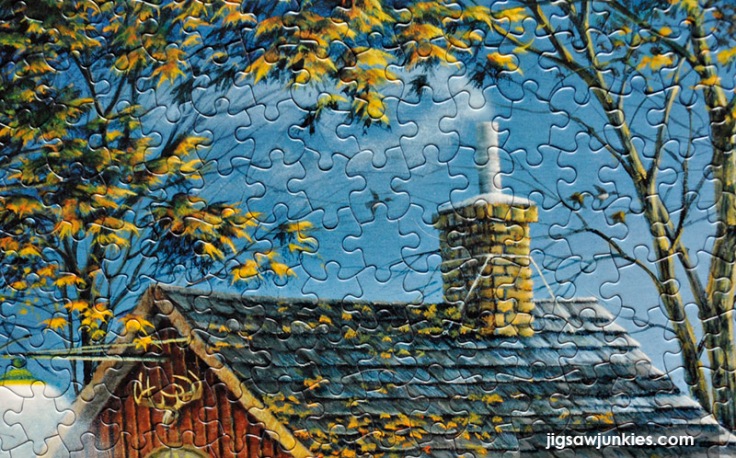 The most difficult part of the sky is the leaves. The green-and-yellow leaves are a repeating pattern with colors changing all over so it’s hard to follow lines or other cues on the pieces. The background behind the leaves is a very dark blue. It looks lighter in the photo below than it does under overhead lights at night, when the dark blue and dark green both become vague “dark blackish”. However, there are some helpful yellower leaves at the bottom and highlights on the branches. The White Mountain pieces have rather strange shapes too, so you can look for the right shape to fit. Overall, this section wasn’t impossible or frustrating for me, but it’s definitely on the more challenging side. 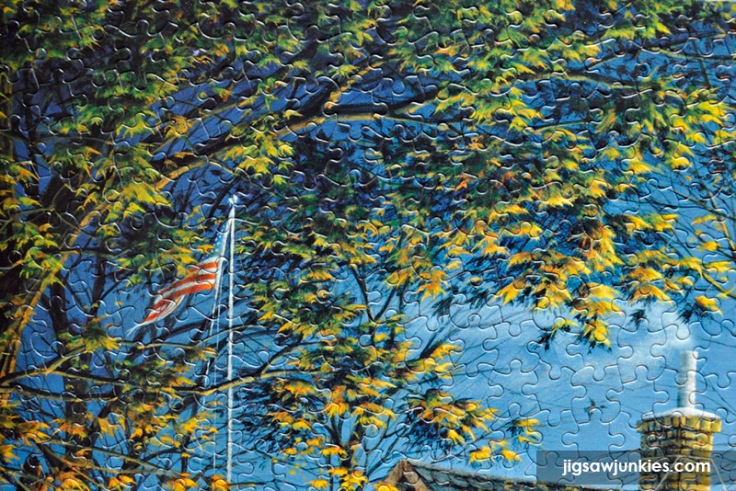 I’ve given assembly an 8 for this puzzle.

White Mountain’s “Autumn Traditions” by Terry Redlin is a beautiful and nostalgic fall-themed puzzle that comes in 1000 pieces and 300 pieces so you can choose your level of difficulty. The 300 piece version is easy and crops out some of the more difficult sky. The 1000 piece version is easy around the country store and pumpkin patch, but moderate-to-difficult for the sky portion. The colors are very pretty and brighter than many Redlin puzzles. The quality is very good. I especially like White Mountain’s larger piece size and very flat, smooth finish. This would be a lovely puzzle to frame.  Recommended!