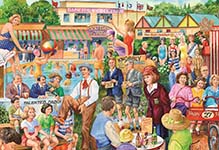 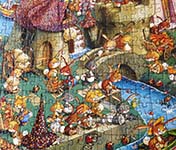 Company: Heye (Germany)       Release Date: 2013          Artist:  Francois Ruyer   Verdict:  10/10 This was a very fun puzzle to put together.  Heye's pieces are standard shaped and a bit smaller in size than some brands, so not for those with difficulty with eyesight or who like large-sized pieces.  But...

The Jigsaw Junkies blog began in March of 2014. It was started by Jane Holmes as a way to learn more about the puzzle industry and connect with other jigsaw puzzle fans. Along the way, Jigsaw Junkies has seen and fulfilled the need for information that was previously unavailable on the web, including a detailed analysis of puzzle brands, research on out-of-print puzzle series such as the Limited Edition Waddington’s Christmas puzzles, and interviews with puzzle makers to see what goes on behind the scenes. In April of 2016, the Jigsaw Junkies blog became part of Puzzle Warehouse, the largest distributor of puzzles in the United States.