Double Retrospect by Keith Harring from Ravensburger. 32,000 pieces. With the help of his wife, Kim, and 6-year-old daughter, Nicole, David was able to complete the massive puzzle in approximately 360 hours over the time span of over a year. He began his project in March of 2012 and finished it just two months ago in July. After some difficulty mounting the puzzle—difficulties which included having to rearrange his basement, fortify the edges of the different sections of the puzzle, visit multiple hardware stores and having trouble getting the puzzle to securely stay in place—David was done. Now, relaxing after such a mighty task, David took some time to answer a few of our questions. In our interview, we discussed the challenges of working on and displaying Double Retrospect, as well as get to know David a little bit. A big thanks to David, who was so friendly and amiable in our interview. It was a pleasure to ask him about his puzzle habits!

David and his wife, Kim, and daughter, Nicole, stand in front of the completed masterpiece in their basement, where David has a craft area to work on his puzzles.

Q: How long did it take you to complete Double Retrospect?

A: This puzzle took approximately 360 hours to complete. I started on March 12, 2012 and finished the last pieces on July 27, 2013.
Just preparing the puzzle for display took nearly 20 hours. I estimate that another 10-15 hours were used to take and set up over 3,400 photographs.
Q: Did anyone help you?
My daughter Nicole (now six and a half) helped on several occasions, mostly with the last 10-20 pieces on the many of the cartoons. [She] and my wife, Kim, put the last two white pieces together!
Q: Were there points where you wanted to give up, or were you determined the whole way through?
A: You’ve heard the terms “mental block” and “writer’s block." I think I suffered “puzzle block." I hit this point with about 6000 pieces remaining in late June of 2013. I remember thinking “Why am I doing this?” and “I just can’t do this anymore." So I left the puzzle alone for several days.
When I looked at it again I had this break through: “This is a 6,000 piece puzzle now. Just finish it!” Over the next five and a half weeks, I put the majority of those pieces together.
Could this [puzzle block] have [had] anything to do with the fact that it was summer and I didn’t want to be in the basement? Most likely!
Q: What was the most challenging puzzle you ever completed before this one?
I completed Ravensburger’s 18,000 piece “Tropical Impressions." The most challenging part were the green border pieces. I struggled and struggled with those pieces because they were so uniform in shape. I would have preferred not to have them at all. 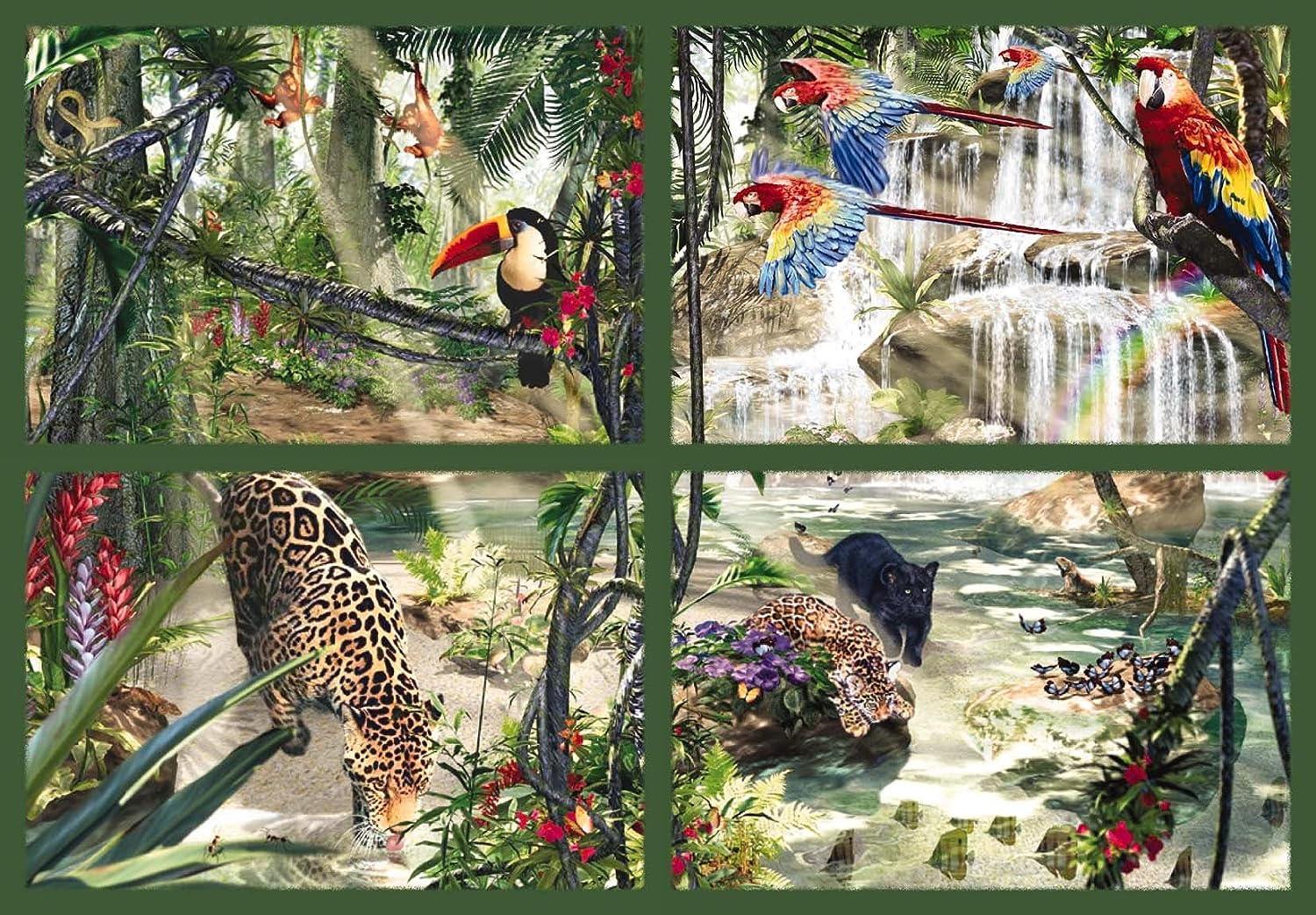 David says he enjoys SunsOut's shaped butterfly puzzles. Here is one we have from artist Lori Schory, an 850 piece shaped puzzle with vibrant colors and imagery.

I work on “normal” size puzzles all the time. I enjoy working on 1,000/1,500/2,000 and 3,000 piece puzzles. Often times, I am working on several smaller puzzles while working on larger ones. I have made gifts of them to family and friends. I enjoy these puzzles because of the variety of cuts they use, and some are even shaped (e.g. Sunsout’s butterfly puzzles).
Q: How did you approach such a large puzzle? Did you spend most of your time sorting?
Just seeing the puzzle packaged the way it was, in one VERY LARGE box, eight bags of pieces and a booklet made me wonder why I purchased such a large puzzle in the first place.

The box alone must be quite large to account for all 32,000 pieces! We include a picture of the box on the product description page to give a visual.
The next step was difficult: mix all the bags together or do it bag by bag? In the end I chose bag by bag because I do not have all that much space in my basement. For many, this is not a true way of doing puzzles but think of all the pieces—especially the white ones!
I spent roughly 1/3 of the time sorting the puzzle pieces: first by colour, then by shade, then by shapes. At one point I had 31 piles of pieces. Dollar stores sell plastic storage containers—some with two compartments—which I began using after the first bag was finished. This really helped storing and organizing the pieces. When I found myself working slowly on the puzzle, I began sorting the next bag. This way, I was “ahead” of the game.
The combination colours, like red/black/blue, did present some difficulty because it meant having to piece together the red/black or blue/black pieces first. Of course the white pieces were “fun” too. Many could be paired, as I discovered after the third bag, especially the centred ones and the offset ones. Then I noticed that some pieces had a very particular knob-shape (by the fourth bag). So sorting the white pieces became easier and easier.
I also discovered (that in the very last bag, for the very last cartoon) a piece having four colours (pink/red/blue/black). Out of 32,256 pieces only one piece had this combination!
Q: What advice would you give to other puzzlers who want to challenge themselves?
The challenge with “Double Retrospect” is to stick with it. Working on a puzzle of this size requires lots of time to sort the pieces. It also has a lot to do with your daily schedule and the mood you’re in. Most of the time I only had 20 or 30 minutes to work. Not much work flow for getting into it: sometimes putting together 5 or 10 pieces, other times up to 50 or 60. Then there were stretches of several days that would go by before I could work on it again. The weekends, when I was lucky enough, I could work for a few hours. This was how I could make some headway. The best weekend I had was in April 2013 when I had 5.5 hours to work. I nearly completed one cartoon!
One point to remember: it will not necessarily be the number of pieces that challenges: it is the overall colour scheme and theme of the puzzle. The green pieces (Tropical Impressions) were more of a challenge than anything I’ve put together.
I have two 1,000 piece puzzles from Piatnik “Wine Corks” (row upon row upon row of … wine corks) and “Coffee” (spilled coffee beans and a scooper). These puzzles combined took me over 30 hours to put together.

Even though this 1000 piece Piatnik puzzle is considerably smaller in size and piece count, David still considers it quite the challenge because of the imagery.
Q: What's your favorite puzzle that you've ever completed?
I would say my favourite puzzle is Ravensburger’s 9,000 piece “Zodiac." This was the first really large puzzle (over 5,000 pieces) that I had completed. It is also the first puzzle that I mounted, framed and hung on a wall. It’s featured on the back of my business card. I also dedicated it to my grandparents who are now both deceased.
I have always preferred landscapes to anything else. I do have several puzzles of art work, sci-fi and still life. I prefer mountain landscapes although I do have some picturing beautiful seascapes.

The 5000 piece Zodiac puzzle is dedicated to David's deceased grandparents and is featured on the back of his business card.

Recently, and now that I will have a large display wall, I am hoping to have a “themed” display going for puzzles: Germany, Italy, France and the rest of Europe, Christian Riesse Lassen, and Josephine Wall. I also started to frame holiday puzzles (Easter and Christmas) and seasonal puzzles such as spring, summer, fall and winter.
Q: Thank you for answering our questions!
Thank you so much for this opportunity. Keith Haring's "Double Retrospect" was definitely a challenge I won't soon forget. This has been fun and hope that Ravensburger, Educa, or Clementoni come up with another 32,000 puzzle (hopefully it'll be a landscape or seascape!)