Edward Hopper (1882-1967) is most famous for his work Nighthawks. Hopper was greatly influenced by a trip to Paris where he was introduced to Impressionism. This was decisive for the trajectory of his career. He forgot the Old Masters and lightened his palette and painted with lighter, quicker strokes. Hopper’s choice of subject matter was often unpredictable. He strove to escape boredom at all costs so he kept on the move, traveling, immersing himself in new surroundings, and often ended up painting the places he visited. 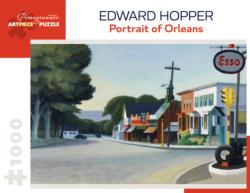