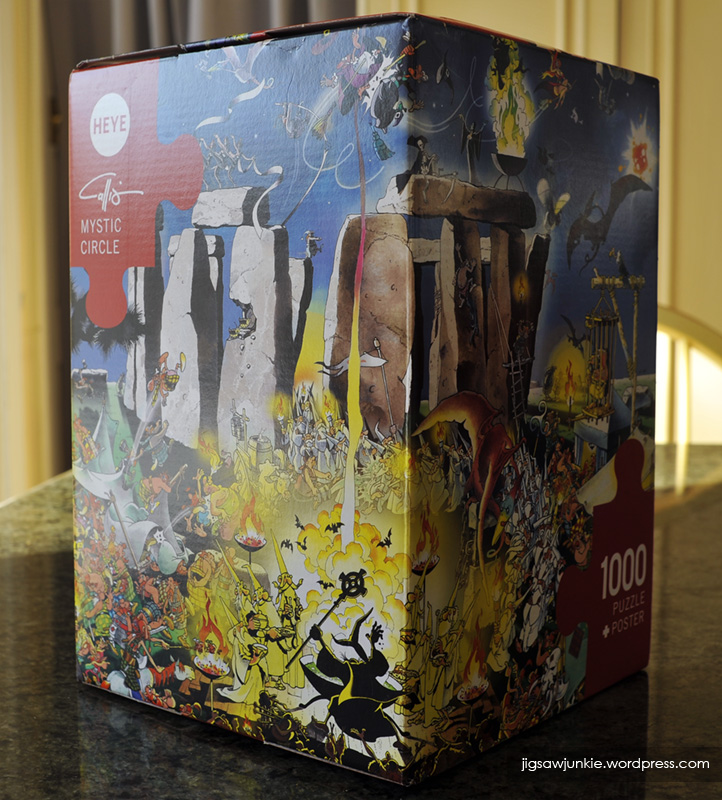 Box Quality:  (10/10)I have a thing for Heye triangular boxes, and I’m happy every year to add to my collection of them. Pretty much, if it’s in a Heye triangular box, I will get it. This year (2016) the boxes are as good as ever and, in fact, include more goodies inside the box than in previous years.

The box has an attractive closer view of the image on the two front sides and on the top, along with the name of the puzzle, artist, piece count, and Heye logo. The back of the box shows the full image. 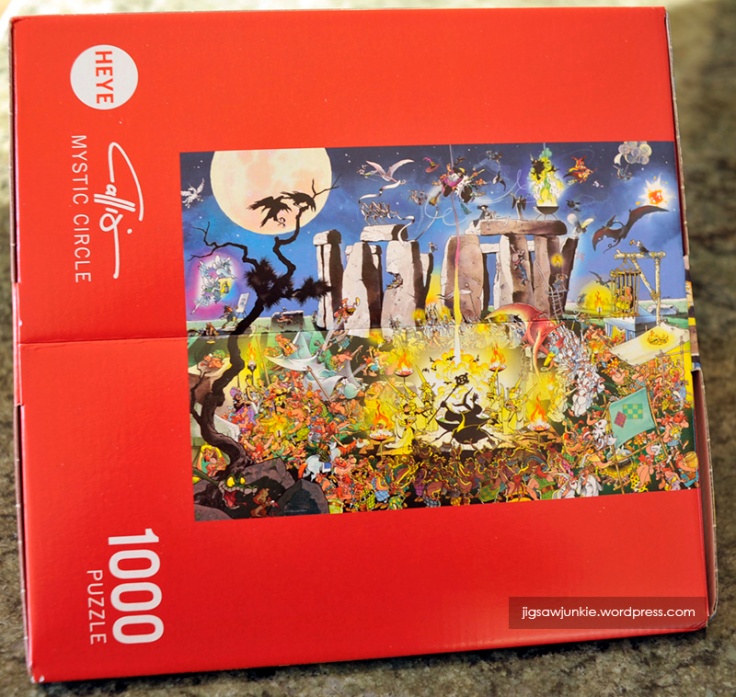 The top of the box has a close-up detail from the image, the piece count, and the Heye logo. This is ideal for shelving top-out, as I do with these triangular boxes. You can see my Heye shelf here. 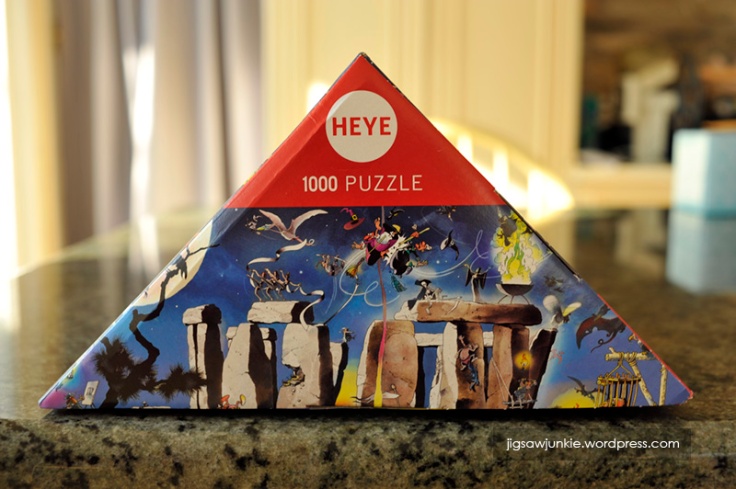 Inside the boxes this year we have the very large poster, with pictures of other puzzles available in the 2016 line on the back. In addition, there is a guarantee card and a mini catalogue. Nice! Years from now, it’s wonderful to have this record of the other puzzles released at the same time so you can see what they were and track them down if desired. 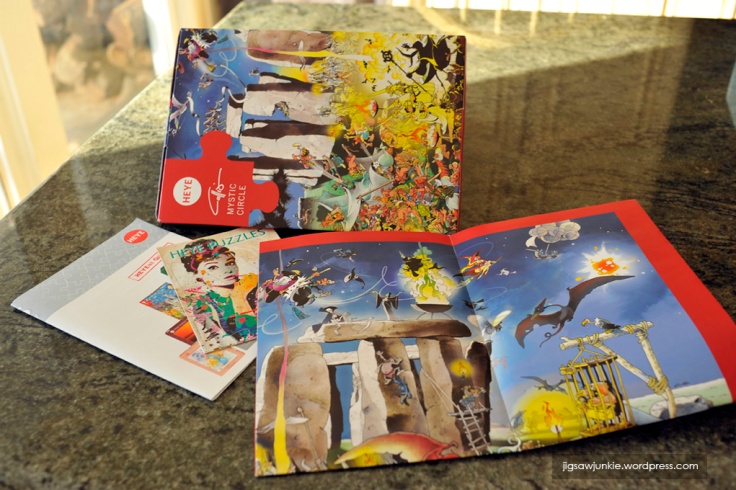 Below is the poster front and back: 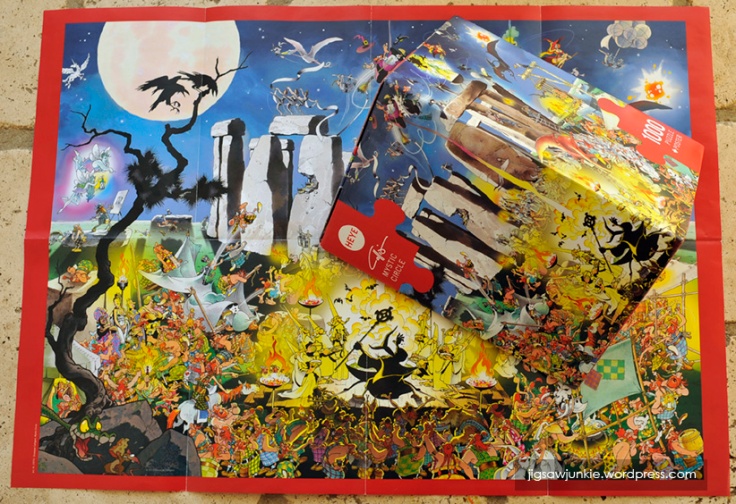 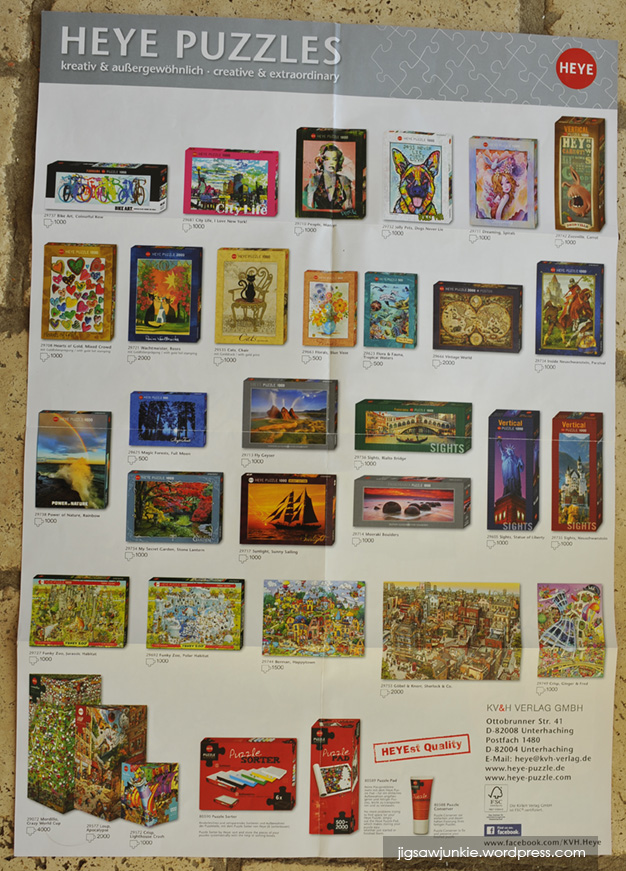 Some of my favorite Heye puzzles have a mystery/Halloween theme including “Who Did It?”, “Castle of Horror”, and “Walpurgis Night”. I was excited to see a new puzzle in this vein for 2016. “Mystic Circle’ is set at Stonehenge and features mainly Scottish warrior types, along with some witches and fairies, having a celebration. What Scottish warriors have to do with Stonehenge, I’m not exactly sure. But the figures have a “Asterix” feeling to them. It’s a fun picture with some strong color areas (the blue sky, the moon, the Stonehenge stones, and the yellow in the center. It also has the ‘crowded scene’ element with many Scottlsh men in various plaid colors and patterns as well as a group of white-dressed Druids. I would have liked an even larger image with more going on, but for 1000 pieces it’s a very nice image. 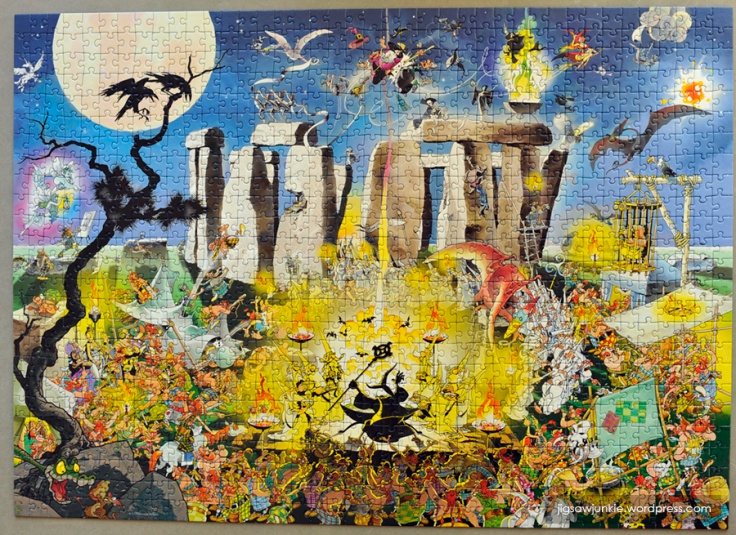 The quality of Heye puzzles is very good. The pieces have gotten a little larger in the last few years, and they are about the same size and thickness as Ravensburger.  It’s a grid-cut puzzle, but has quite a lot of variation in piece shape, as you can see in the close-up below. There’s never a problem of a piece seeming to fit where it doesn’t actually go.

The only reason it scores a 9 instead of a 10 for me is that the fit is not particularly tight. You need to use caution when moving groups of assembled pieces around and you can’t lift the edge of the puzzle without it falling apart. Still, the final finish is flat and relatively seamless. 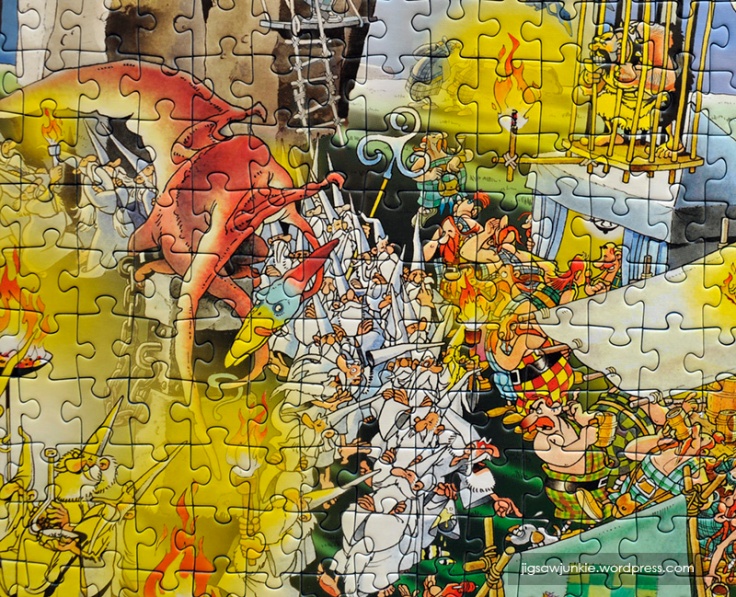 I did this puzzle right after doing the 2000 piece “Sherlock and Co” puzzle, so it felt small by comparison. Certain areas like the yellow central area and the blue sky, were pretty straight forward to assemble. All the little figures require more of a compare-to-poster approach. It’s a very solid Heye cartoon puzzle, though perhaps on the easy side compared to most of them. 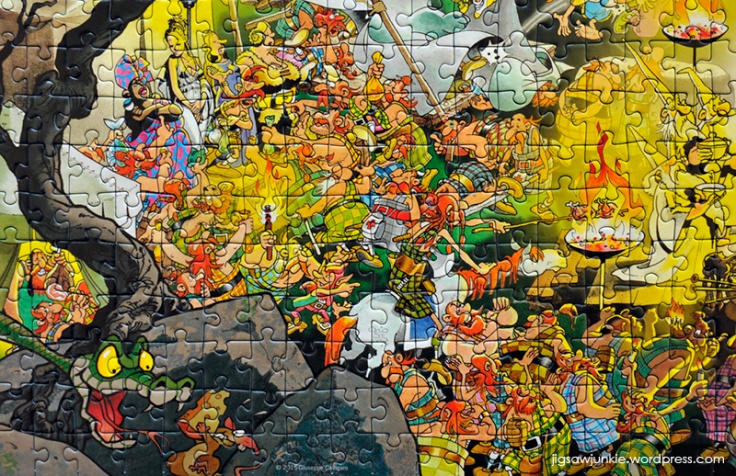 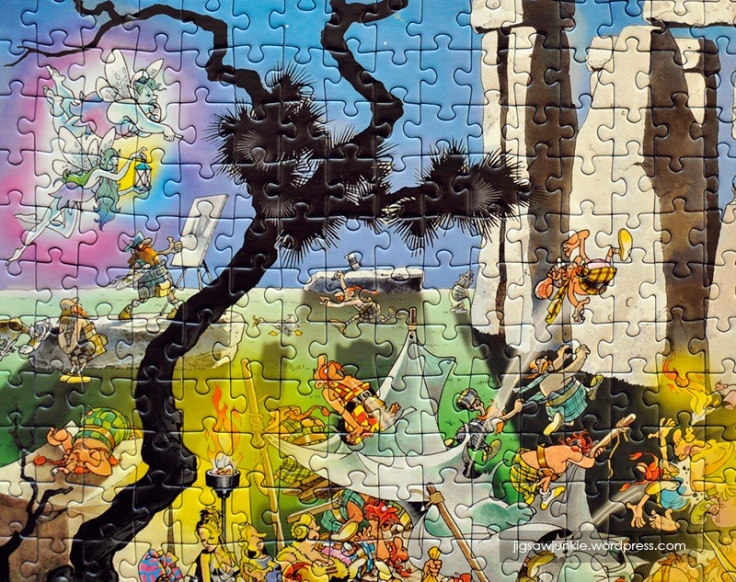 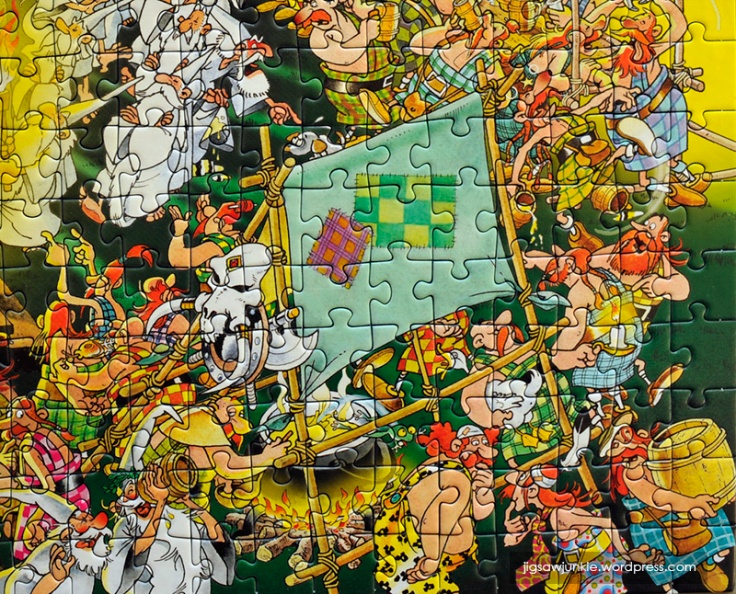 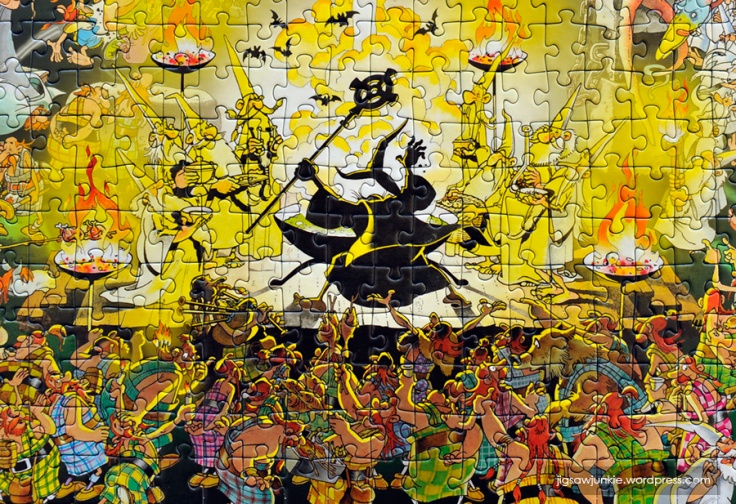 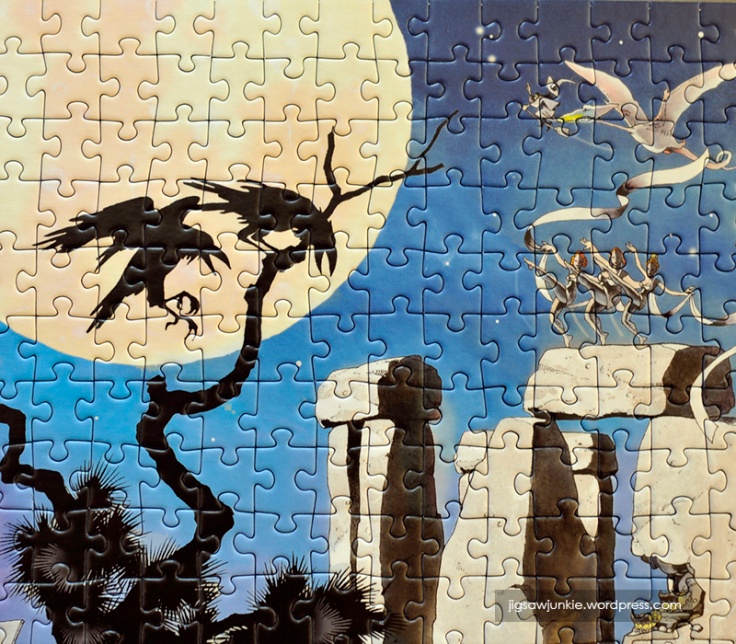 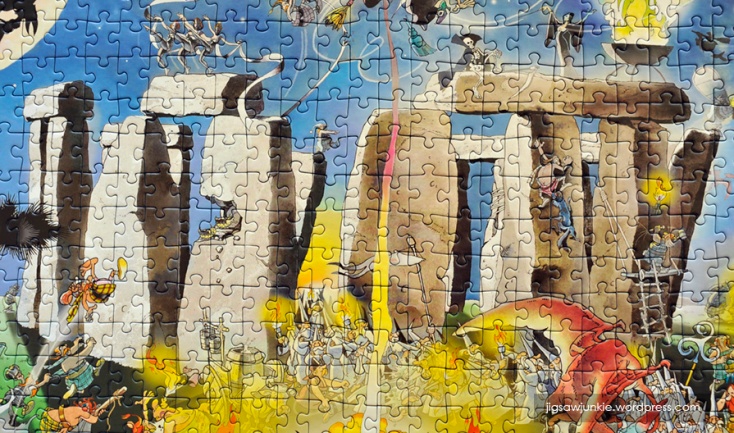 If the image appeals to you, the Heye quality definitely makes it worth buying. Enjoy!

It’s now up on Amazon UK for a very reasonable price.  It’s also on ebay from various sellers. In the US, Puzzle Warehouse and Jigsaw Jungle both carry Heye puzzles, though they don’t have the new 2016 puzzles in stock at the time of this writing.