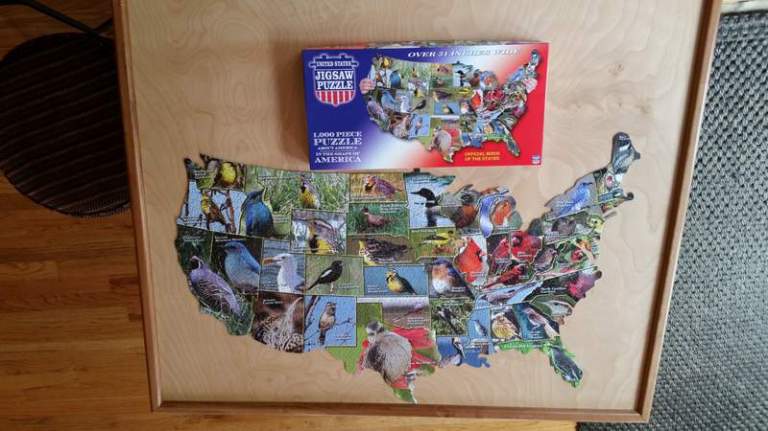 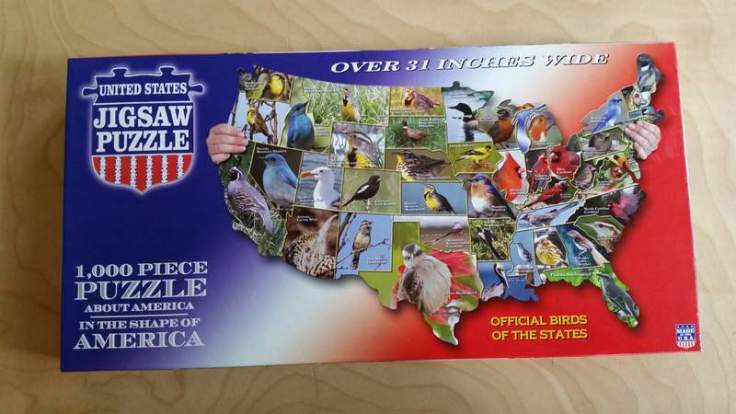 THIS REVIEW SUBMITTED BY PHILIP

This was an interesting puzzle to do because of its shape and my wife and I enjoyed working it and figuring out the birds. There are also some ‘special’ qualities about this puzzle that we discovered once it was completed. I will divulge those latter in the review.

The box is nothing special but not thin either. The picture on the front of the box shows someone’s hands holding the puzzle or probably a picture the puzzle was made from. Those hands are not part of the puzzle. The sides show more pictures all containing the hands so I assume they took one picture then cut pieces out of to show the hands to good effect. I couldn’t resist taking a few pictures with my hand in there. All four sides show roughly the same picture so no additional information there. The artist or manufacture date is not shown on the puzzle. The back of the box show two of the other puzzles in the series. This is a second-hand puzzle for us and there were no additional goodies in the box. One of the special things about this puzzles I found while researching it: some people reported releases that had a slightly different picture on the box than on the puzzle. The major difference was that the New Mexico Roadrunner was a different picture and a different background than on the actual completed puzzle. Our puzzle matched the box. 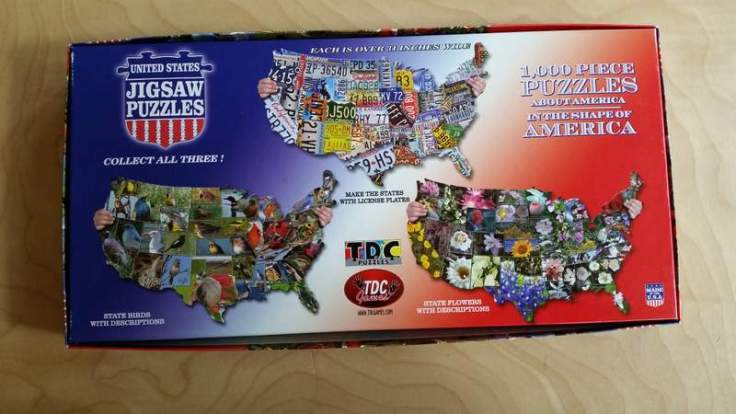 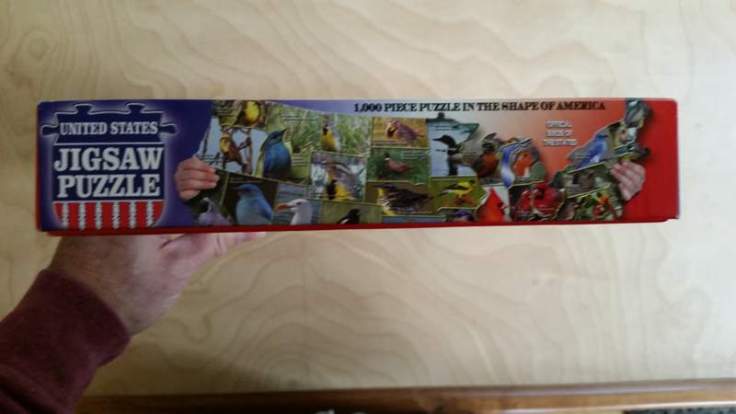 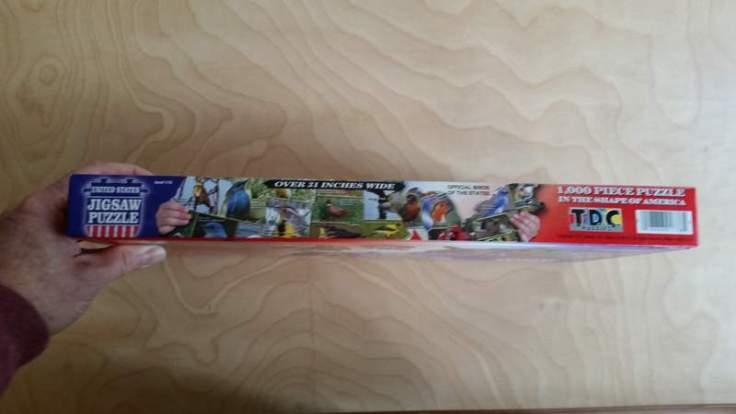 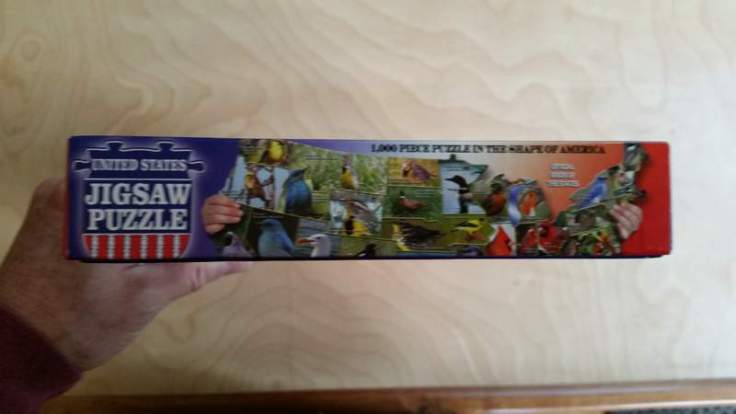 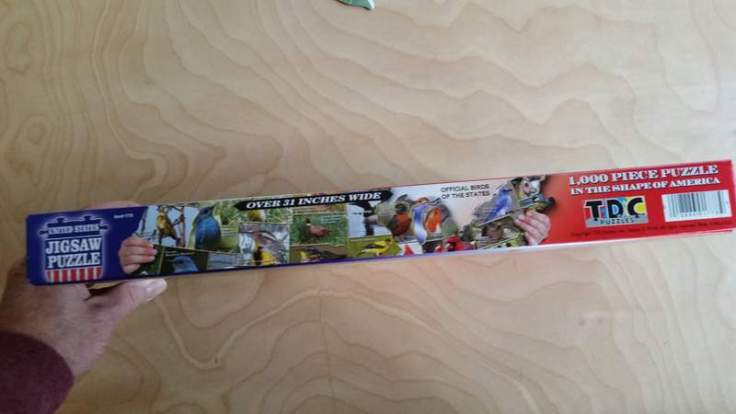 The picture is clear and the colors are bright. Some of the backgrounds are blurry because of the camera focus on the birds but this does not detract from the quality or workability of the puzzle. 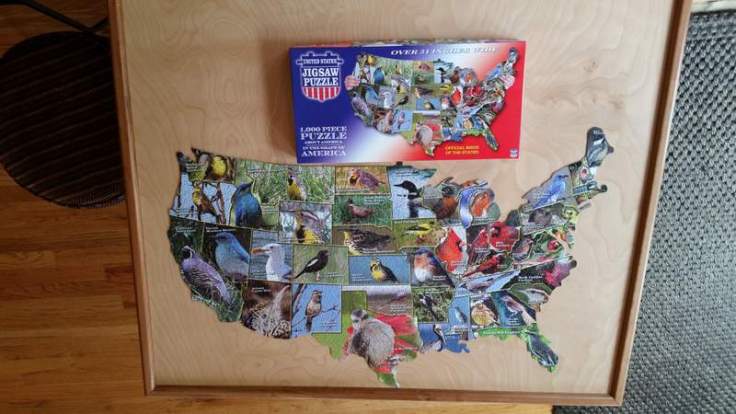 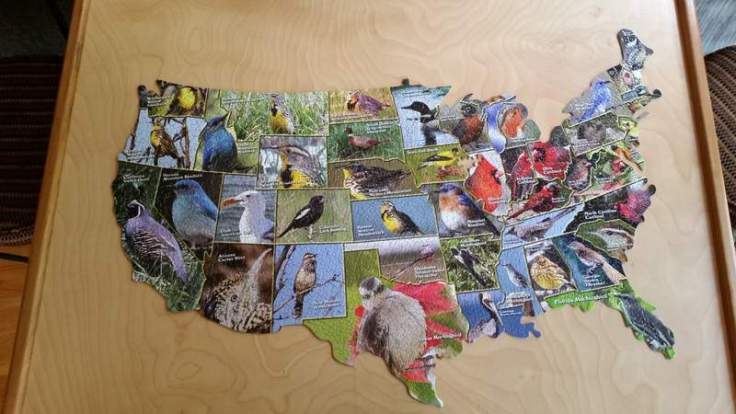 The puzzle is not grid cut and the pieces are a good thickness but not Ravensburger quality. They hold together well and I think I could pick the puzzle up by one corner if I was brave enough to try. The pieces interlock well and there is never a doubt if a piece fits or not. The puzzle was missing three pieces but we didn’t think that was a big deal. The odd shapes lead to a few of the pieces being more delicate than normal because the connectors are thin and fragile. The pictures show this. The puzzle has additional interest for us because we enjoy bird watching so we took some time to enjoy the assembly and the finished product. This puzzle is of the continental United States and does not include Alaska, Hawaii, the District of Columbia (which has its own official bird) or any of the provinces. It also doesn’t include the few birds that some states have specially distinguished as ‘Hunting’ birds. They have two state birds, one regular and one that can be hunted. This puzzle might be hard to display; we normally stand the board up and rest the puzzle on the bottom rail but we couldn’t do that with this one because the puzzle buckles when resting on Texas. 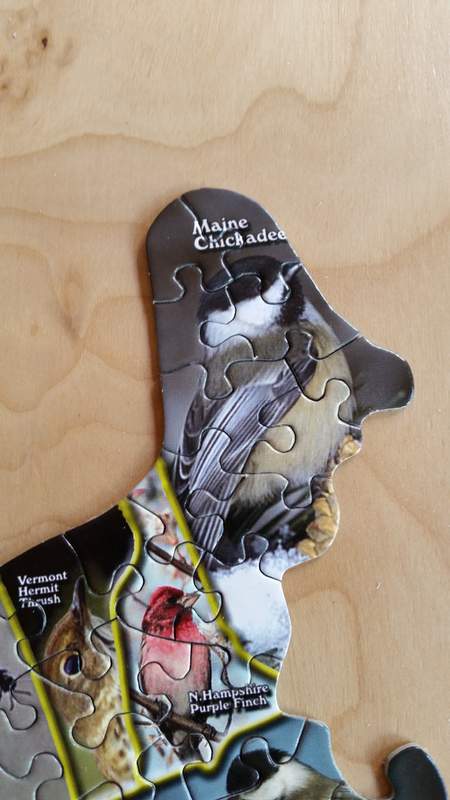 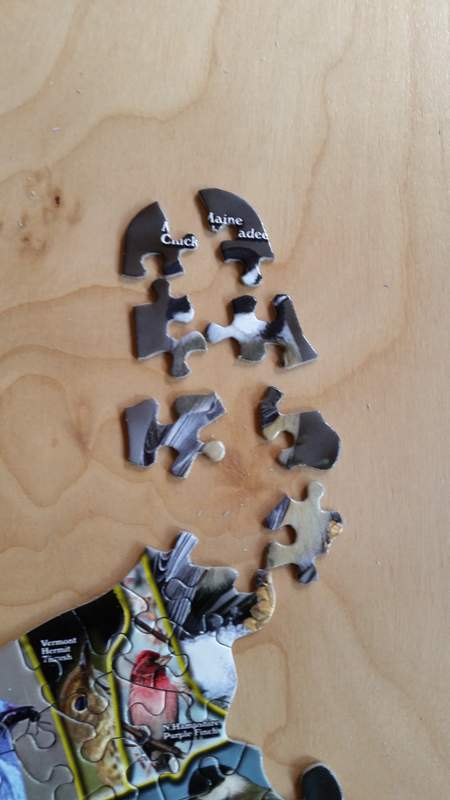 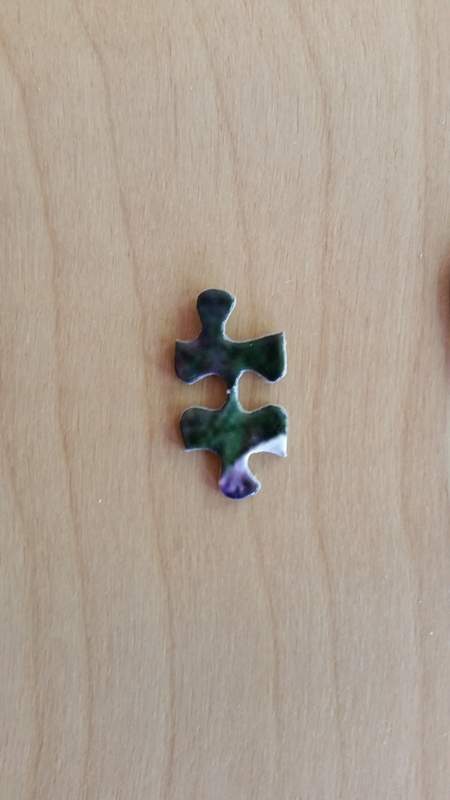 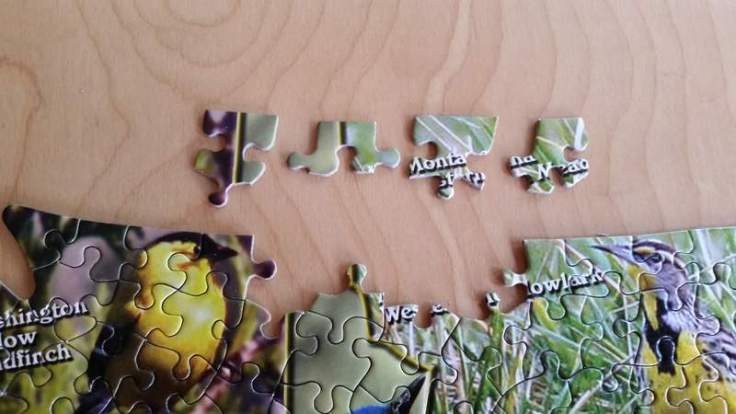 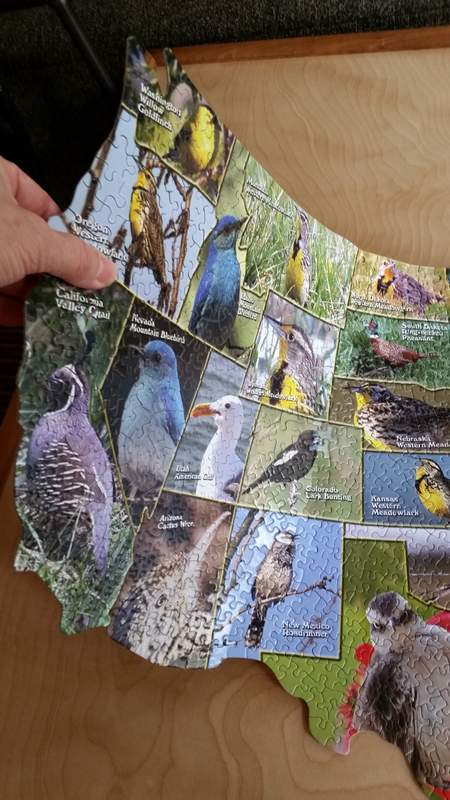 The puzzle proved a challenge to start because of its shape; you can’t really separate out the edge pieces from the rest of the puzzle because they might have a straight edge but would just as likely have curves. See the pictures for a clearer idea of what I mean. We eventually settled on working on the backgrounds of the individual states or the birds themselves because of the colors. That proved to be a good strategy and the puzzle went quickly once we used that method. The background colors were easy to put together and the birds weren’t bad except for the dull grey ones which we left for last. We aren’t sure why with the large number of wild birds in the US so many states chose the same bird or why some chose dull uninteresting birds like the mockingbird which is represented four times. Two states have chickens as their state birds. A few of the pieces have such thin middle connectors that if the puzzle is worked much more they will probably come apart, that is why this section didn’t rate higher. 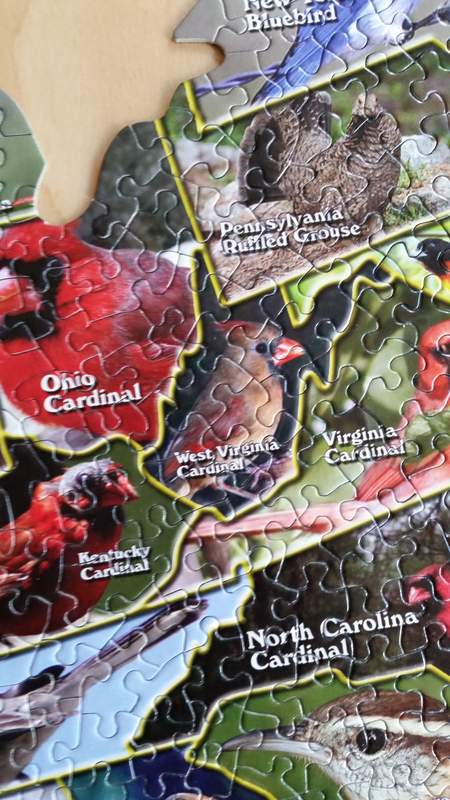 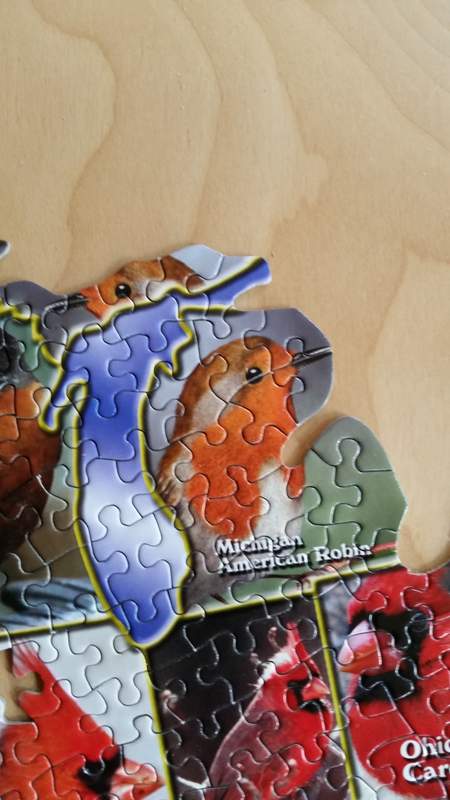 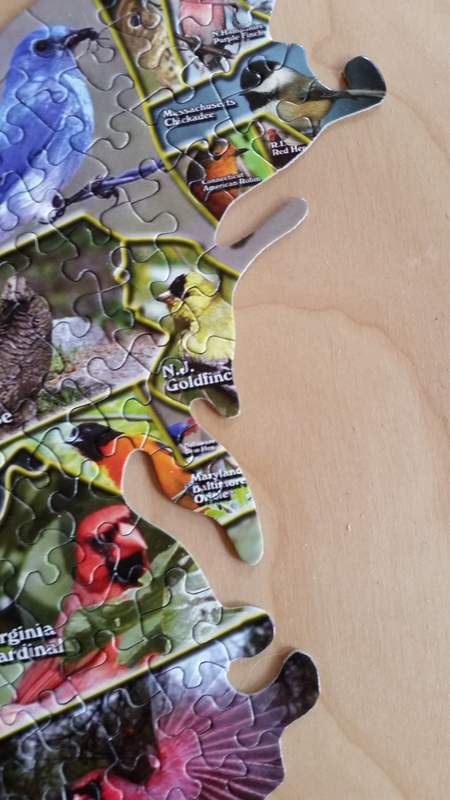 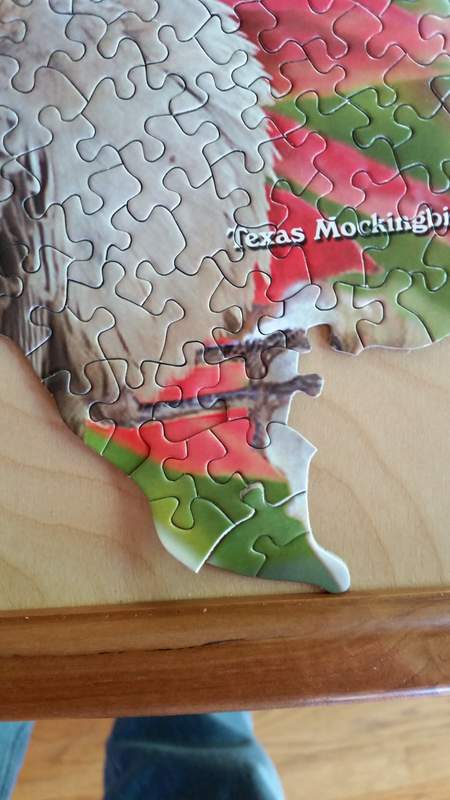 This was an engaging puzzle and was fun to assemble. We looked at the others in the series and will probably do the Road Trip state puzzle too. Once we had the puzzle completed we noticed a few odd things and I did some Internet research to reveal a few discrepancies. Alabama’s state bird is the Northern Flicker, sometimes called the Yellowhammer. The picture on the puzzle is of the European Thrush whose common name is the Yellowhammer. These are not the same bird, the Northern Flicker is a woodpecker and the actual Yellowhammer is not found in the United States. Once we found that, we did more looking; New York, Nevada and Idaho all have the same bird, the Mountain Bluebird which shouldn’t be confused with the Missouri Bluebird which is a different species and is more colorful.

Of the seven states that use the Cardinal as their state birds six of the pictures use the male because of the red color I assume while West Virginia uses the female with a bit of color enhancement that we haven’t seen in the real birds. The picture of the birds from Michigan is odd because Michigan is split across a great lake but more interesting is the fact that the picture is of a European Robin and not the American Robin which is the actual state bird. I would like to thank Wikipedia for its help with identifying the state birds and pictures. I gave the puzzle two bonus points for leading me to these interesting bird/state items. Who knew you would need to fact check your puzzle?

Others in the Series: Road Trip America, Official Flowers of the States, License Plates (the same hands appear in all four pictures of the entire series)

You can find other great map puzzles here.