As a diving and tropical fish enthusiast since early childhood, it was only natural that Royce would gravitate toward the colours and patterns of nature and marine life. Royce's delight in the natural world is reflected in the wonderfully creative and colorful fish, frogs and other creatures that spring to life in his images.

Incredibly, Royce did not receive any formal training in art - he started painting landscapes at the age of 19 and found he could immediately make a living, which he did and basically learned on the job. He began using the airbrush two years later and found himself following a career as an airbrush illustrator for the next 15 years. By this time his wildlife and marine airbrush art had attracted a large enough following that he was able to retire from commercial illustration and concentrate solely on painting his colourful wildlife images.

His 24,000 pieces “Life, the Greatest Puzzle” is one of the largest in the world! Within this one piece, Royce depicts the most beloved jigsaw puzzle themes including balloons, safari animals, space, and sea life. 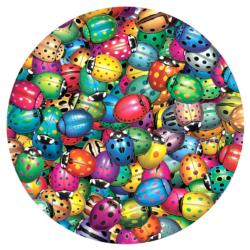